We say goodbye to the 2020 NASCAR Cup Series race package featuring 550 horsepower Sunday at Texas Motor Speedway which will be the 20th race using it and will also be the 11th and final race on a 1.5-mile track.

It’s the AutoTrader EchoPark Automotive 500, the second of three races in the Round of 8 that has only one berth locked in with Joey Logano’s win last week at Kansas Speedway.

Three spots remain for the other seven drivers to fight over.

Will drivers like Kevin Harvick, who has won at Texas the last three seasons, layback and try to get in on points as he sits 41-points above the cutoff or will he go all out for the win to avoid any catastrophes next week at Martinsville Speedway?

He should probably be safe either way.

“I feel a lot better after (Sunday), getting out of (Kansas) with a good day, leading laps there,” Harvick said of his runner-up last week. “I feel good about that leading into Texas. I think as you look at Martinsville, I feel a lot better about it than what we were the first race. Obviously, the first race we had a whole bunch of problems with no fans, alternator, all the things that went wrong. We ran well at Phoenix. I think we just have to see how the chips fall in the next three races and see where it all ends up.”

Harvick was 15th in the first Martinsville on June 10 which used the 750 hp package that he’s won two of his series-leading nine races with. It sounds like he wants the Championship 4 clinch this week so he doesn’t have to sweat Martinsville which is part of the reason the Westgate Las Vegas has him listed as the 5/2 favorite to win while William Hill sportsbooks have listed lower at 2/1.

Another reason is that seven of his wins this season came using this week’s race package, although only one of them came on a 1.5-mile track (Atlanta, June 7).

The thing about Harvick at Texas is that he didn’t win in his first 29 Cup starts there, but now has three wins in his last six starts. He’s currently on a run of 12 straight top-10 finishes at Texas, nine of them top-fives, and it all coincides with his move to Stewart-Haas Racing to start 2014. In the July Texas race, he led 40 laps and finished fifth.

Harvick deserves to be the favorite. He’s a badass at Texas.

Joey Logano’s win last week was his first win since the pandemic shut down after having two wins in four races before the shutdown. His two wins on 1.5-mile tracks tied Hamlin for the most.

The sportsbooks posted Logano at 14/1 odds as if he’s content with getting in the Championship 4 and will just cruise or coast into the final race at Phoenix. But I see it as quite the opposite.

He has nothing to lose because even if he wrecks the car trying hard for another win, it doesn’t matter because the car won’t race again this season. He went winless 29 straight races after the season re-boot, you don’t think he’s going to scratch and claw to recreate the fun he had last week?

Logano has a long active streak of success at Texas with 12 of his last 15 races there resulting in finishes of seventh or better, including his lone win in 2014. He has 11 Texas top-fives between his 24 Cup starts, including third-place in the July race.

Denny Hamlin and the No. 11 team come in as the second-choice to win at 4/1 odds based on his seven wins this season, but it’s mostly because of what he’s done with this week’s race package that he has four wins with.

He’s a three-time winner at Texas, the last coming in 2019, and he’s led at least 57 laps in the last three races on 1.5s. He’s only 20-points above the cutoff line which is too close for comfort for a driver who expected to be one of the Championship 4.

In the latest SuperBook Championship odds, Harvick is the 5/2 betting favorite to win it all, Logano is 3/1, and Hamlin is at 7/2 odds. 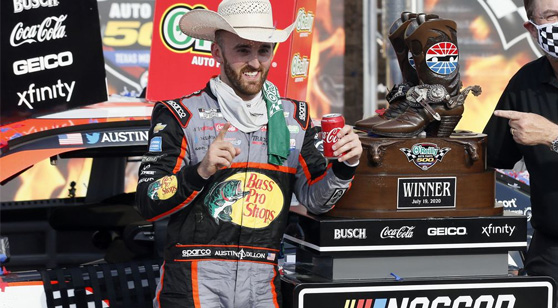 Austin Dillon captured a win at Texas in July but the oddsmakers don't expect him to repeat at the venue on Sunday. (AP)

Alex Bowman is one of the hottest drivers on tour in the last two months averaging an 8.1 finish between his last nine races with a best of third-place over that span last week at Kansas.

“We had a good run in Kansas last weekend and captured stage points, which is what we needed to do,’ Bowman said. “The points don’t look good in our situation, so we really need to go to Texas and have a strong car from the start.”

Bowman knows his situation well being 27-points down from the cutoff line and knows this week’s race package is his better chance to win at Texas than the other one at Martinsville. He’s being offered at 20/1 to win at the SuperBook and 25/1 at William Hill.

How about Kyle Busch this week? He’s got five Truck Series wins at Texas, nine Xfinity Series wins, and three Cup Series wins. This guy knows Texas, he loves Texas and despite no wins in 2020, he’s a great bet at 20/1 odds to win. This is his shot and with no championship to fight for, his only goal in the last three races is to win a race. He was fourth at Texas in July and he was fifth last week at Kansas.

Austin Dillon won the July Texas race at 100/1 odds and is down to 60/1 this time around as is his RCR teammate Tyler Reddick who was second in that July race. Erik Jones has multiple Texas wins between the Truck and Xfinity Series and has three top-fives in nine Cup starts there.

He was sixth in July and is 50/1 to win this week which I strongly suggest throwing $5 on for giggles. Jones just found a ride for 2021 with Richard Petty Motorsports driving the No. 43, so again these last three races of 2020 will be his last in a quality car with a chance to win.