First-time Cup winners have won the first two races of the 2021 NASCAR Cup season for the first time since 1950 and there are few candidates with a legitimate shot at making it three straight in Sunday’s Dixie Vodka 400 at Homestead-Miami Speedway’s high-banked 1.5-mile paper-clip layout.

There are 16 of the 38 drivers entered this week looking for their first Cup win and the ones that stand out the most are drivers with past victories at Homestead in the Xfinity and Truck Series.

How about rookie Chase Briscoe in his Stewart-Haas Racing No. 14 who won in Xfinity last season while also winning in the Trucks in 2017?

His teammate Cole Custer won at Kentucky last season as a rookie for his first Cup win and is being offered at 100-to-1 odds. Briscoe obviously has the oddsmakers' attention.

Bubba Wallace won a Truck race at Homestead in 2014 and we get to see how the No. 23 responds with the 550 horsepower package after seeing the other two packages first to start the season.

I expect the car to be competitive and very similar to a Joe Gibbs Racing Toyota.

But I think the best shot at winning from a first-timer is Tyler Reddick in the Richard Childress Racing No. 8 Chevrolet who won back-to-back Homestead races in the Xfinity Series in 2018 and 2019. In his first Cup start there last season he finished fourth after leading three laps.

The oddsmakers at William Hill opened Reddick at 25-to-1 and opened his teammate Austin Dillon at 60-to-1.

Check around for better odds at other sportsbooks because I’m sure someone in charge of creating NASCAR odds fell asleep on Reddick and Briscoe.

I’ll have a small bet on Reddick but I don’t believe we’ll have a third straight race with a first-time winner. I think it’ll be one of the well-known names in NASCAR to win, or at least I hope.

It’s been a while since I cashed an “odds to win” ticket in NASCAR and it’s bugging me so I’ve made some personal changes.

My daily routine has been changed. Whatever I did before both Daytona races, I’m doing differently now. I used to make a pastrami sandwich for lunch, this week it’s turkey. I used to leave the TV show ‘Friends’ every day on TBS while I work, now I put a movie channel on. I was wearing New Balance, now I’m on Asics. You get the idea. Wade Boggs ended a batting slump after he switched to eating chicken before a game and then he did it the same way for the rest of his career.

What I didn’t change was my normal process of filtering out the meaningless stuff and diving into who should be the best based on the final races in 2020 using the 550 horsepower race package.

The last three races on 1.5-mile tracks were each won by all three manufacturers, and neither Kevin Harvick nor Denny Hamlin was one of them. One driver did well in all three. I think Alex Bowman is the man this week.

“Going to Homestead this weekend gives us a good opportunity to show what our 1.5-mile program looks like this season,” Alex Bowman said. “We had a really solid end to the 2020 season, and I know that we will have a fast Ally Camaro this weekend.”

Bowman and his team just got things figured out at the tail end of the 2020 season and had top-fives in their last three races on 1.5-mile layouts. Bowman’s crew chief Greg Ives elaborated more on Homestead.

“We are really looking forward to getting back to Homestead,” Ives said. “We have a strong 550 (horsepower) program at Hendrick Motorsports and that showed at the end of last year. We’re looking forward to getting to the track and having another solid race. Knowing that the start of the season didn’t go our way in the Daytona 500, we just need to crawl back to where we need to be.”

William Hill sportsbooks have Bowman listed at 22-to-1 to win and I have him weighted in my betting strategy to win the most with him. For whatever it’s worth, Bowman won the third race of last season at Fontana using this week’s race package.

Another Hendrick driver I’m looking at is Kyle Larson in the No. 5 Chevrolet.

In seven Cup starts he has three top-fives and 325 laps led. He also won an Xfinity Series race at Homestead in 2014. He has shown everyone the best way around the track is running a consistent line around the upper rim of the track. William Hill has him surprisingly low at 17-to-2 odds (+850). I'm still searching for a better number. 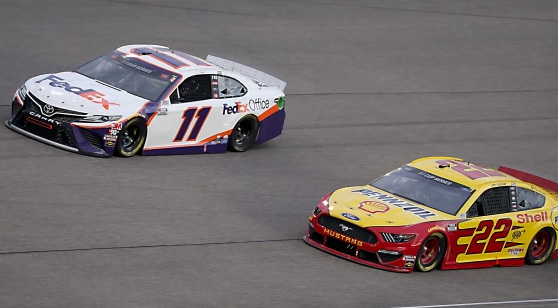 Denny Hamlin will be looking to repeat this weekend as he captured the checkered flag at Homestead last summer. (Getty)

Denny Hamlin is the points leader (104) after two races his Toyota was capable of winning and now he gets his first look at the 550 HP package which won four of the 20 races using it last season. He’s the active leader with three Homestead wins, the last coming in June of 2020 when he led a race-high 137 laps.

“We feel good in our efforts through the first two races of the season,” Hamlin said. “Obviously, we wish we could have come out with a victory at either of the Daytona races, but we still had good performances. We’re confident in how we’ll run this weekend and hopefully have a repeat of last year.”

Hamlin is deserving of favorite status as William Hill has him at, but 9-to-2 odds is a bit overboard despite him dominating the Homestead race last season.

I would have made Kevin Harvick the favorite.

The main reason I would open Harvick as the favorites is what he did last season winning seven of the 20 races using the 550 HP race package. Nothing has changed on it this season so there shouldn’t be any reason to believe they somehow got worse over the winter and that everyone got better with it and will be on the same page as Harvick’s excellence using it.

William Hill books are offering Harvick at a juicy 7-to-1 price, which is very generous.