Baylor enters this powerhouse matchup as a -5-point favorite, given a moneyline of -225 which is roughly a 70% chance to win. The spread and implied probability for Baylor to win this game is a bit of a stretch, as Illinois is a top three to five team in the country.

Both schools enter tonight's game undefeated, with Baylor beating Washington and Louisiana while Illinois has taken down Ohio, Chicago State and North Carolina A&T. Ohio is the best opponent of the combined five, as Washington is coming off a loss to California-Riverside.

Illinois is easily one of the more talented teams in the nation, as a matchup against the Baylor Bears is a perfect way to test the Big Ten club. The Fighting Illini covered all but their game against the Ohio Bobcats, a formidable opponent and favorite to win the Mid-American Conference (MAC).

What's been impressive about Illinois through three games is that the freshmen have stepped up in a big way. The lethal combination of Wooden Award candidates Kofi Cockburn and Ayo Dosunmu is to be expected, but Andre Curbelo and Adam Miller have had huge impacts already.

The experience goes to Baylor in this one, but the Fighting Illini have experience off the bench in Trent Frazier and Da'Monte Williams. If the young scorers and senior-led bench can support the play of Dosunmu and Cockburn, tonight's game should be a close one and possibly come down to one possession.

Baylor should be considered the best team in the country, even with the Gonzaga Bulldogs in the mix. Baylor has three returning players from a year ago, more hungry than ever after COVID-19 suspended March Madness. If Baylor wasn't dangerous enough as it was last season, they are now playing with urgency and a chip on their shoulder.

Baylor blew the doors off Washington, but as already stated, the win is not as impressive as advertised. The three-headed monster of Jared Butler, MaCio Teague and Davion Mitchell is enough to win any basketball game, but the two players who might give Baylor the edge against Illinois includes Adam Flagler and Jonathan Tchamwa-Tchatchoua. 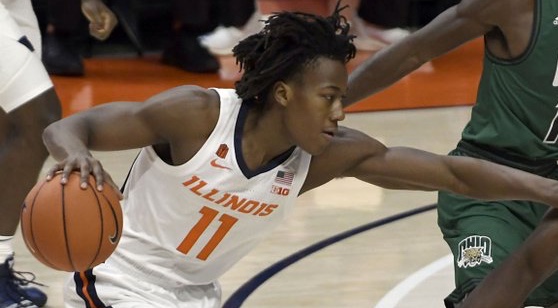 The Bears trio vs the dynamic duo of Illinois is the story here, with the Fighting Illini bench experience against the scoring sophomores of Baylor. Mark Vital might also be a huge difference in this game, averaging almost nine rebounds per game but only the eighth highest-scorer on Baylor.

Baylor has won 15 straight prime-time games, including winning the first half in 13 of its last 14 prime-time games. The spread is too high for the talent both teams have, but if you must pick a spread then siding with Illinois is perfectly fine. However, much like Kentucky-Kansas, this game seems to present better opportunities in other markets.

The point total is worth a look, as both schools are limiting opponents to 67 points or less through their first five combined games. Also, the first half for Baylor is worth a look, matching the above trend of winning 13 of 14 at night.