The featured matchup on Wednesday night is a neutral-site showdown between the No. 11 West Virginia Mountaineers and the No. 1 Gonzaga Bulldogs. Tip-off on ESPN from Bankers Life Fieldhouse is set for 7 p.m. (ET).

Gonzaga opens as a -7.5-point favorite in this Big 12-WCC matchup. West Virginia has already posted three straight-up wins in the first week of the season while going 2-1 against the spread. The total has stayed UNDER in the last two outings against VCU and Western Kentucky.

Through three games, West Virginia has averaged 75.7 points a game while shooting 41.1% from the field. It shooting percentage drops to 31.7 from three-point range.

This lineup goes four deep with players scoring at least 12 PPG. Guard Miles McBride has led the way with 16.3 points and 3.3 assists a game. Forward Derek Culver is second on that list with 15 PPG and he is pulling down an average of 10 rebounds.

Culver scored 15 points to help erase a 10-point second half deficit in last Friday’s 70-64 victory against Western Kentucky. Defensively, the Mountaineers have held teams to fewer than 71 points in all three outings. They have averaged 40.7 rebounds over the three-game span.

Top-ranked Gonzaga has been able to exceed its high expectations in victories against Kansas and Auburn. Forwards’ Drew Timme and Corey Kispert have been unstoppable. As the two leading scorers, they have combined for more than 50 points per game.

Guards’ Jalen Suggs and Joel Ayayi are also scoring in double figures. Timme and Ayayi have each averaged eight assists and Suggs has dished out a combined 14 assists.

The Bulldogs were expected to be one of the highest scoring teams in the nation again this season. They are shooting 58.5% from the field but just 30.8% from three-point range. Defensively, Gonzaga did give up 90 points in the 12-point victory over Kansas. Yet, Auburn only managed 67 points in the 23-point scoring margin. 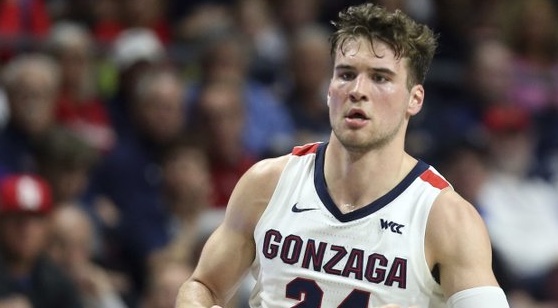 Corey Kispert is one of two Gonzaga Bulldogs with top odds to win the 2020 Wooden Award. (AP Images)

Inside the Stats – Gonzaga Bulldogs

West Virginia faces an uphill challenge on Wednesday night when you consider Gonzaga’s earlier performance against the best team in the Big 12.

The Bulldogs are the kind of team you ride until they prove you wrong. The Mountaineers are a solid challenge at No. 11 in the rankings.

However, I don't see West Virginia keeping this game closer than 10 points and I don't see Gonzaga scoring fewer that 90 points. This paves the way for a play on the Bulldogs SU and ATS while taking the OVER on the total line.