The Arkansas Razorbacks head to Thompson-Boling Arena this Wednesday night to face the No. 9 Tennessee Volunteers. Tip-off on ESPN2 for this SEC tilt is set for 7 p.m. ET.

Tennessee is set as an 8 ½-point home favorite against the Razorbacks. The betting line for the total is 142.5 points.

Arkansas was knocking on the door of the national rankings at 9-1 straight-up with a 6-3 record against the spread. However, the lone loss was to Missouri by 13 points as a 6 ½-point home favorite this past Saturday. The total has gone OVER or ended as a PUSH in the last five games.

The total has gone OVER in nine of Arkansas’s last 10 road games.

Tennessee lost some ground in the national rankings with Saturday’s eight-point home loss to Alabama as a 10-point favorite. This was the Volunteers’ first SU loss of the season against seven wins. They are 6-2 ATS with the total the total staying UNDER in six of eight games.

One of the reasons Arkansas was not ranked after its 9-0 start was the level of competition. Its tightest spread was 3 ½ points as a road favorite against Auburn.

To make impression on the polls with a win on Wednesday, guards’ Moses Moody (16.9 points) and JD Notae (15.4 points) will need a good night shooting the ball. The Razorbacks will be without forward Justin Smith (ankle) for the near future. He was one of five players averaging at least 10 points per game.

This all adds up to a scoring average of 88.5 points with a shooting percentage of 45.0 percent from the field. This drops to 33.7 percent from beyond the three-point line. 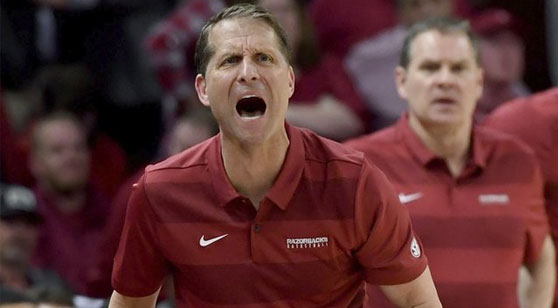 Arkansas travels to Knoxville looking to bounce back from a home loss to Missouri. (AP)
We may be compensated by the company links provided on this page. Read more