Pac-12 action on Thursday night sees the Arizona Wildcats travel to Los Angeles, California to take on the UCLA Bruins. Tip for this massive game is set for 9 p.m. (ET) and will air on ESPN2.

The point total is set at 140.5, which slightly leans OVER for both schools. Arizona is just 11-10 on the O/U this season, while UCLA has gone OVER in 11 of 19 games. The combined point total is 22-18 between both schools, slightly favoring the OVER. 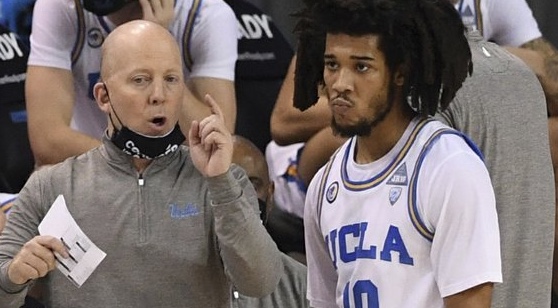 James Akinjo has done a terrific job leading this Wildcat offense with the absence of Jemarl Baker. Akinjo averages 14.3 points per game, and leads the team in assists with 5.3 per game. He is a large reason as to why Arizona averages 15.7 assists per game, which ranks 54th nationally.

Terrell Brown has really stepped up as well, seeing four or more assists per game in six of his last nine games (touched six twice). Besides passing, the Wildcats rebound very well with 38.6 per game ranking 50th in the nation. Azuolas Tubelis, Jordan Brown and Christian Koloko all average five or more rebounds per game - with Tubelis also averaging 11.7 points per game.

One weapon Arizona has on offense that is better than almost every school in the nation is getting to the free throw line. Arizona attempts 24.7 free throws per game (fifth nationally), and makes 17.8 per game (fourth nationally). Akinjo gets to the line more than any other Wildcat (4.3 attempts per game). He, Mathurin and Terrell Brown all shoot 77% or better from the line. Look for these three names to produce well on offense if Arizona wishes to pull off the road upset.

He also saw 27 points against Stanford, as his strongest games this season have come in recent road games. This game is in Los Angeles however, in which Juzang has scored 10 total points over the last two games inside the Pauley Pavilion. If UCLA wants to run with Arizona's offense, Juzang will need to continue his hot touch that seems to fade at home (he had 16 against Arizona earlier this season).

Tyger Campbell continues to quarterback this team to perfection, while Jaime Jaquez, Cody Riley and Jules Bernard fill in the gaps. With Smith out, Riley is now the veteran leader for this club. Coach Mick Cronin has shown he is not afraid to go down low to the big man when the offense is in trouble, as Riley has delivered.

Riley's point of emphasis must be the glass however, as Arizona is a wonderful rebounding team that can hurt the Bruins if given enough possessions. UCLA was able to knock off Arizona earlier inside McKale, as UCLA beat Arizona at their own game. The Bruins saw 32 free throw attempts to Arizona's 16, as Campbell connected on all eight attempts and the Bruins hitting 84.4% from the line.

Inside the Stats – UCLA Bruins

UCLA is the slightly better team, so go with the home club. Also, Cronin is a bit more trustworthy in big games than Arizona coach Sean Miller. Don't be afraid to side with the home Bruins, who are a bit more poised (stems from coaching) and have a touch more depth than Arizona.

The point total is tricky and can go wither way. If you must bet the total, try going OVER. The O/U trends favor the OVER, slightly, at 22-18 combined. Also, both teams crossed 75 points in the first meeting. One team should touch 70 points, and if the point spread is any indication then the other school should be close behind.

WHERE TO BET ARIZONA-UCLA