Colorado suffered an embarrassing and rough loss to conference cellar dweller California last time out, losing 71-62 as a nine-point favorite. It was especially disappointing for the Buffaloes, who pushed past Stanford in Palo Alto by a 69-51 score as one-point 'dogs in the previous outing.

Colorado climbed to within a game (two back in the loss column) with their win over Stanford, while putting distance between themselves and the Cardinal. However, a loss to Cal sent them tumbling to fourth place behind USC, UCLA and Oregon, while moving back to just a half-game in front of Stanford.

Oregon is on the rise after losing three of four games from Jan. 7-Feb. 4, a span which included a loss at Colorado, 79-72, and a pause due to COVID-19. The Ducks have won three in a row, and they have covered the past two, both wins against the Arizona schools.

The last time these teams met in Boulder, Chris Duarte went for 27 points and five rebounds with two blocked shots, while Eugene Omoruyi went for 18 and 8. The Buffs had four scorers in double digits, with both McKinley Wright IV and Evan Battey going for double-doubles. 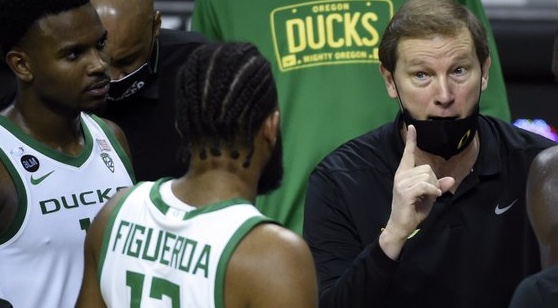 The Oregon Ducks look to avenge an earlier loss to Colorado, in which Dana Altman's group lost by seven points 79-72. (AP)

The Buffaloes have been just so-so on the road lately, going 5-5 SU/ATS in their 10 true road games this season. Colorado has had a difficult time cobbling together a winning streak away from home. They are hoping a trip to Eugene is the cure for their ills. They won 79-72 against the Ducks on Jan. 7 in Tucson as a three-point favorite as the 'over' (141) cashed.

Colorado has long had difficulties on the road, going just 17-43 ATS across their past 60 games away from home, and they're 13-39 ATS in the past 52 on the road against teams with a winning home mark. Until they start showing consistency on the road, they are a team to consider fading.

The Buffaloes have scored 74.9 PPG to rank 99th in the country in scoring, while hitting 46.2 percent from the field to rank 72nd. From behind the 3-point line, Colorado is hitting a 37.5-percent clip, ranking 40th. But free-throw shooting is their specialty, as they are the top team in the nation at 82.4 percent.

The Ducks are on a three-game win streak, longest since they rattled off eight straight wins from Dec. 4-Jan. 2. Oregon has covered each of the past two games, but they haven't covered in three straight outings at any point this season.

Oregon F Eric Williams Jr. heads into this one as a question mark due to a knee ailment. he is averaging 11.3 points, 6.5 rebounds, 1.8 assists and 0.9 steals per game in 13 games this season. Williams is one of five Ducks averaging double-digit points.

The Ducks rank 83rd in the country, averaging 75.4 PPG, while hitting 46.2 from the field to rank 73rd. They're also hitting 35.8 percent from behind the 3-point line, ranking 84th. Oregon struggles from the charity stripe, going just 70.8 percent to rank just 173rd.

On defense, Oregon allows just 67.0 PPG to rank 86th, and they're 98th in defensive field-goal percentage at 41.6. Oregon guards the perimeter pretty well, as the opposition is hitting just 32.3 to rank 122nd.

Oregon comes in with a pair of victories on the road at Arizona State and Arizona last time out, and they're 2-0. They also won their last game at home against Washington, barely missing out on a cover as 13-point favorites, 86-74.

Colorado has been a good team at home, but they're rather erratic on the road. They beat a good Stanford team, but they lost to a horrific Cal team. Who will show up on Thursday? The best bet is to back the more consistent team, and that's the Ducks.