One of the biggest showdowns in the Big Ten this season is set for Sunday afternoon with the No. 3 Michigan Wolverines going on the road to face the No. 4 Ohio State Buckeyes. Game time on CBS from Value City Arena is set for 1 p.m. (ET).

Ohio State gets the slight nod in Sunday’s matchup as a 1.5-point home favorite. The betting line for the total opened at 148.5 points.

The Wolverines moved to 10-1 straight-up in conference play with Thursday’s seven-point win at home against Rutgers. Despite failing to cover as 9.5-point favorites, they are still 8-3 against the spread. The total has stayed UNDER in six of their last seven games.

Michigan is just 2-5 both SU and ATS in its last seven games against the Buckeyes with three of those losses coming on the road. The total has stayed UNDER in two of the last three meetings.

Ohio State extended its current SU winning streak to seven games with a 10-point road win against Penn State on Thursday night. It is 6-1 ATS during this same span after covering as a five-point favorite. The total has gone OVER in five of the seven wins.

The Buckeyes have a SU 10-1 record at home this season while going 7-4 ATS. The total has gone OVER in three of their last five home games. 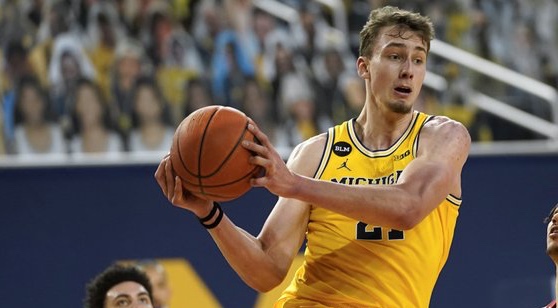 Michigan enters Sunday's matchup as the underdog, despite winning 15 of 16 games this season while also covering in 12 of those games. (AP)

Michigan has quickly returned to form over its last two games coming off an extended three-week layoff due to health protocols.

It was able to erase a 14-point deficit to get past Wisconsin on the road before holding off Rutgers at home after leading by nine points at the half. Center Hunter Dickinson has led the way all season long with 14.6 points and 7.8 rebounds a game.

Forward Isaiah Livers is a close second with 14.5 points and 6.1 rebounds. Guard Franz Wagner has the hot hand shooting the ball with a 51% field-goal percentage.

Overall, the Wolverines are averaging 78.4 points with 39.4 rebounds a game. They are shooting 49.9% from the field and 38.0% from the three-point line. Defensively, Michigan is holding opposing teams to 64.9 PPG.

The Buckeyes moved to 12-4 SU in Big Ten play with Thursday’s victory. EJ Liddell ended that game with 23 points by scoring 17 in the second half.

The sophomore forward has now exceeded his team-high 15.5-point scoring average in four of his last five starts. Liddell also leads the team in rebounds (6.6) and blocked shots (1.3). Guard Duane Washington Jr. is another key part of the Buckeyes’ offense with 14.9 PPG.

Ohio State is scoring an average of 78.1 PPG and shooting 46.1% from the field. This drops to 36.2% from three-point range. It is pulling down 37 total rebounds a game.

While the defense gave up more than 80 points twice in the last four games, the Buckeyes’ points-allowed average on the year is 68.6.

These two Big Ten powers matchup extremely well on paper in what should be a highly entertaining game from start to finish. My lean is towards Michigan SU in a game that could be decided by the final possession of the game.

A stronger play is the OVER on the total line. As a featured matchup, I expect both of these offenses to play at a high level. This, in turn, should make the final score a bit higher than the oddsmakers expected when setting total line.

WHERE TO BET MICHIGAN-OHIO STATE