The No. 5 Illinois Fighting Illini will be on the road this Tuesday night in a trip to the Breslin Center to face the Michigan State Spartans. Game time on FS1 for this Big Ten tilt is set for 7 p.m. (ET)

The opening spread has Illinois favored by seven points on the road. Tuesday night’s total line has been set at 145.5 points.

The Fighting Illini extended their straight-up winning streak to seven games with a 31-point romp over Minnesota this past Saturday. They moved to 5-2 against the spread during this run with\ the total going OVER or ending as a PUSH in three of their last five outings.

Illinois has lost four of its last five games against Michigan State SU but it has covered in two of the last three meetings. The total has stayed UNDER in seven of the last 10 games between the two.

Michigan State continues to plod its way through its most disappointing season in recent memory. It is just 5-9 SU in Big Ten play while going 3-11 ATS. The total went OVER in Saturday’s seven-point road upset over Indiana after staying UNDER in seven of its previous nine contests.

The Spartans are 3-2 SU and 1-4 ATS in their last four home games. The total has stayed UNDER in all five games. 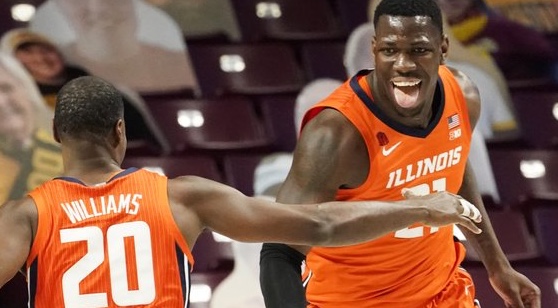 Illinois center Kofi Cockburn is averaging a double-double on the season, averaging over 17 points and 10 rebounds per game. (AP)

The Fighting Illini got another big effort from Ayo Dosunmu in Saturday’s win. He scored 19 points while dishing out 10 assists.

The junior guard is averaging a team-high 21.2 points a game this season. Earlier in the month, he put up 32 points in a road victory against Nebraska. Center Kofi Cockburn has also been instrumental in his team’s success this season.

After scoring 22 points on Saturday, his points per game average on the year is 17.6 with 10.3 rebounds a game.

Defensively, the team has been able to hold opposing teams to 68.6 PPG. However, it did give up 70 or more points in three of its last six games.

One of the bright spots this season in an otherwise dismal showing has been the steady play of forwards’ Aaron Henry and Joey Hauser.

Hauser is second in scoring with 10.2 points while pulling down a team-high 6.4 rebounds a game. Guard Joshua Langford is another key scorer with 9.8 PPG.

The Spartans are averaging 70.8 points with 38.4 rebounds a game. Their field-goal percentage from the floor is 42.5% while shooting 33.3% from three-point range. Michigan State has given up more than 70 points in each of its last three games as part of season average of 71.7 points allowed.

Illinois should win this game by just showing up at the Breslin Center on Tuesday night. The Spartans have not been their usual tough out at home given their sketchy playing form.

Michigan State still has the SU edge in this series but I am betting on Illinois in this season’s only regular-season matchup SU and ATS.

Recent betting trends in this series have led to a lower score than the total line suggested. I see that holding true on Tuesday night with the Fighting Illini dialing up the defense to get their eighth-straight win.

WHERE TO BET ILLINOIS-MICHIGAN STATE