The Ducks are coming off a tough 72-58 loss at USC on Monday night, failing to come close to covering a 3.5-point number as the UNDER (139.5) connected. It was a tough blow to Oregon's chances at a Pac-12 title, although they still are mathematically alive.

The Cardinal are simply jockeying for seeding in the upcoming Pac-12 conference tournament, and they are trying to stay in the picture in the hunt for an at-large NCAA Tournament bid. They likely need to win four or five more games, and they have just three games left on the regular-season schedule. That means they will likely have to go deep in the conference tourney, making the Finals, if not winning it all.

Stanford is coming off a crippling 85-76 loss in overtime at Washington State, failing to cover a 7.5-point number as the OVER (134.5) connected. Offense hasn't been a problem lately, as they're averaging 76.0 PPG across the past three outings.

These teams met back on Jan. 2 in Eugene, and the Ducks hammered the Cardinal by a 73-56 score to easily cover a 6.5-point number as the UNDER (138.5) came through. LJ Figueroa led the way with 13 points, 12 rebounds, two steals and a blocked shot, one of four scorers in double digits that day. 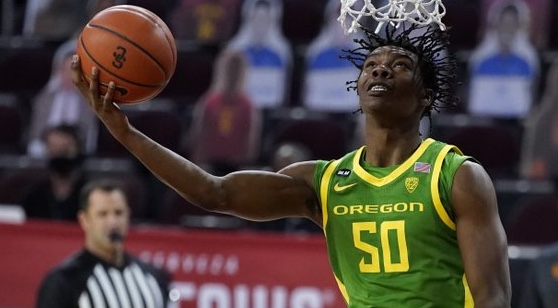 Oregon is coming off of a 72-58 loss to USC after winning five straight games prior, this marking the second of a three-game road stretch. (AP)

The Ducks were humming right along until hitting a serious pothole in the road at USC. The 14-point loss to the first-place Trojans was their worst of the season, and they have now failed to cover in back-to-back games after a 3-0 ATS run.

While Oregon's offense has been a little inconsistent lately, total bettors are finding the Ducks to be very consistent. The UNDER has hit in five consecutive outings after a five-game OVER run. The first meeting with Stanford also went well under, as the teams combined for 129 total points with a number of 138.5.

Oregon has managed 73.3 PPG to rank 131st in the country, while registering 45.9 percent from the field to rank 79th in the nation. They're also 89th from behind the arc, hitting at a 35.7 percent clip. Oregon is a very subpar team from the free-throw line, however, ranking just 193rd with a 70.2 percent mark at the charity stripe.

Defensively, the Ducks are allowing just 66.5 PPG to rank 80th, and they're 107th in the nation in defensive field-goal percentage at 41.7. They're also 113th against the three, with the opposition hitting at a 32.2 percent clip.

Stanford lost a tough one at Washington State in overtime, 85-76, as 7.5-point favorites. It was a tough loss which might have the Cardinal heading for the NIT Tournament rather than the NCAA Tournament, but there is still time to turn things around.

The Cardinal have won just two of the past four, going 2-2 ATS during the span. They're also a very ordinary 4-4 SU/3-5 ATS in the previous eight outings. At home, Stanford is just 2-2 SU/1-3 ATS in the past four outings.

On defense, they're in the top third in the nation. They allow 68.7 PPG to rank 134th, and they're 40th in defensive field-goal percentage at 40.4. They're also 140th against the three, with the opposition hitting at 32.9 percent.

The Ducks have rolled up big numbers against very good teams over the past couple of seasons. Oregon is 25-10 ATS in the past 35 games against teams with a winning percentage over .600. Stanford, on the other hand, has covered just one of their past five games.

The home team is 18-6 ATS in the past 24 meetings in this series, too, including the first meeting this season in Eugene. But go against that trend and take the Ducks to win straight up. They're the most consistent team.