A huge game with March Madness bubble implications on the line sees the Western Kentucky Hilltoppers, fighting for their tournament lives, taking on the Houston Cougars. Tip for this enormous game is set for 7 p.m. (ET) and will air on ESPN2.

The Cougars enter as favorites at home, given a -12-point spread. Houston has done very well with the ATS this season, covering in 14 of 20 games. Western Kentucky is almost split on the ATS at 9-10.

The point total is set at 134.5, which both schools tend to lean UNDER on. Western Kentucky has gone UNDER in 10 of 19 games, while Houston is 9-11 on the O/U. Combining both schools point total sees an 18-21 O/U slightly favoring the UNDER. 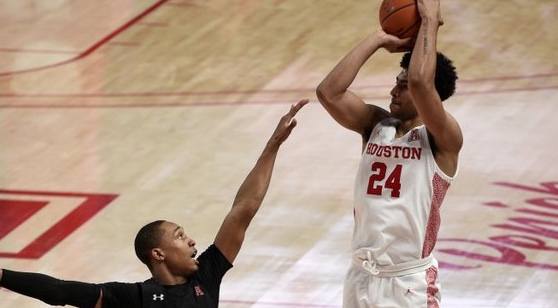 The Houston Cougars have fallen to No. 12 in the AP Rankings, the lowest they have been ranked since they were No. 17 in preseason. (AP)

Charles Bassey is the name to watch for this game, leading the Hilltoppers in points and rebounds per game with 18 and 11.7. Taveion Hollingsworth and Josh Anderson also average a double-digit point total, as the Hilltoppers average 75 points per game.

Western Kentucky is a very good free throw shooting team, hitting 78.9% of the charity stripe shots which ranks ninth in the nation. Also, they play big man basketball very well - averaging 27.4 defensive rebounds per game (57th in nation) and 4.3 blocks per game (49th in nation). Bassey is the main reason for the solid stats, as he must perform well for Western Kentucky to have a chance.

The Hilltoppers are good enough to win a tough road game against the second-best defense in the nation. Western Kentucky has a case to make March Madness even without this win, as they have beaten Memphis, Alabama and Marshall twice. They also lost to West Virginia by only six points, so the talent can match some of the best clubs in the country.

Houston is a very tough outing for any school, let alone playing the Cougars on the road. Houston has yet to lose at home this season, and enter this game with the second-best defense in the nation.

Quentin Grimes, Dejon Jarreau, Justin Gorham and Fabian White all average over five rebounds per game. White just started seeing the court with only two games under his belt. He is coming off a 10 point and nine rebound performance, giving this team another weapon.

The experience of this team is another weapon to consider, with upperclassmen riddled throughout the lineup including four of the top six scorers. This is a fast and long defense that plays on a whole other level at home, so Western Kentucky must be prepared. The most points allowed at home by Houston this season is 67 on Dec. 5 against South Carolina, allowing just 59 points or less in five straight at home.

Inside the Stats – Western Kentucky Hilltoppers

Inside the Stats – Houston Cougars

The amount of points Houston has been given is worrisome, as Western Kentucky is a good enough team to lose by a substantially less margin. Neither school allows 70 points per game, although Houston is capable of touching that mark. Still, the Hilltoppers (playing the road) are unlikely to see anything more than 65 points.

Playing the O/U trends of 18-21 favoring the UNDER, along with Houston's second-best defense (at home), the point total might be better to consider. Houston's 14-6 ATS odds are worth a look if picking a winner, but the point total seems to have more conviction simply for the large -12-point spread given for Houston.

WHERE TO BET WESTERN KENTUCKY-HOUSTON