The Nevada Wolf Pack take on the Utah State Aggies in the second game of a two-game series. Tip for this crucial conference game is set for 7 p.m. (ET) and will air on FS1.

The point total is set at 141.5, which slightly leans OVER when comparing both schools O/U this season. Utah State is split at 10-10, but Nevada has gone OVER in 11 of 21 games this season. 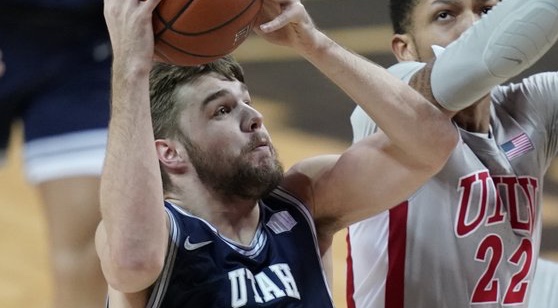 The Utah State Aggies find themselves in a must-win game, taking on the Nevada Wolf Pack while sitting on the March Madness bubble. (AP)

Nevada is coming off a three-point loss to Utah State, a game in which Nevada outscored Utah State by 13 points in the second half. Desmond Cambridge averages the second-most points per game on the team, and saw 23 in the first meeting.

Although Utah State enters with the 33rd-fewest points allowed per game nationally, that number has actually dwindled down a bit. For a defense that allows just 63.5 points per game, the Aggies have allowed 72 points or more in five of its last seven games - including three straight.

Although the defense has taken a hit, the offense has responded nicely. Neemias Queta typically carries the Aggies on offense, but both Justin Bean and Marco Anthony have crawled into double-digit territory for points per game.

The Aggies' strength on offense is their ability to move the ball, with four players averaging 2.6 assists or more per game. The club ranks 34th nationally in assists per game.

Inside the Stats – Nevada Wolf Pack

Utah State's defense should return, but will it come against Nevada? It might, but the Aggies have allowed too many points lately to consider the UNDER. Besides, the trends favor OVER by a game so the point total is a bit sketchy here.

Nevada is great at covering the spread this season, but Utah State playing at home makes the Wolf Pack 16-5 difficult to consider as well. There is no true lock in the upfront markets for this contest, but there is a consistent trend that held true again in the last meeting between these schools. Nevada has won the second half in nine of its last 10 games.

WHERE TO BET NEVADA-UTAH STATE