The Illinois Fighting Illini (18-6, 14-4) travel to meet the Michigan Wolverines (18-1, 13-1) at Crisler Center at 7 p.m. ET. in a battle between Top 5 teams with plenty of Big Ten Tournament and NCAA Tournament ramifications. The game will be televised on ESPN.

Michigan enters as the heavy favorite on its home court despite the fact these teams aren't separated much in the standings or the overall rankings. And Illinois is coming off an impressive 74-69 win at Wisconsin over the weekend, a nice win as 4.5-point underdogs.

The Illini are big underdogs, though, because of the injury bug. All-American candidate and potential National Player of the Year Ayo Dosunmu due to a broken nose suffered in late February against Michigan State. The team's leading scorer is considered questionable for Tuesday's affair. 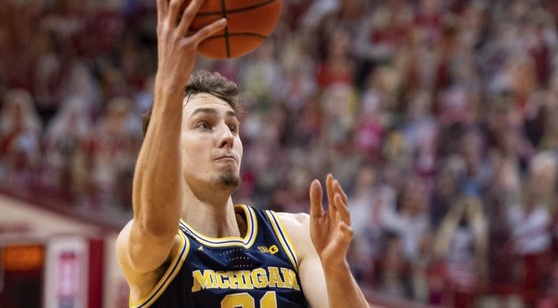 Franz Wagner and the Michigan Wolverines are 12-0 at home this season, looking to secure a No. 1 seed in March Madness. (AP)

The Illini would obviously be in much better shape if Dosunmu is able to play. There is no word if he will be fitted for a plastic protective mask, or if he even traveled with the team to Ann Arbor.

Without Dosunmu on Saturday, Kofi Cockburn stepped up with 19 points, seven rebounds and just three turnovers as the primary scoring option. Andre Curbelo registered 17 points and seven boards before fouling out.

Illinois has covered back-to-back games for the first time since a 4-0 ATS cover run from Jan. 19-Feb. 6, and they have rattled off nine wins in the past 10 outings, including a pair of overtime wins as they have shown a flair for the dramatic.

The Illini rank 17th in the nation with 81.2 PPG, and they're ninth in the nation in field-goal percentage at 50.1. They're also a very good three-point shooting team at 38.1 percent, ranking 22nd overall. The Achilles' heel of this team is at the free-throw stripe, as they're hitting at just a 68.8 percent clip, good for only 235th in the country.

Juwan Howard's bunch might be playing better than anyone in the country right now. They have won seven games in a row since their lone setback at Minnesota on Jan. 16, a stunning 75-57 loss as 5.5-point favorites.

The Wolverines have also won three in a row against NCAA Tournament hopeful Indiana on the road, 73-57, while spanking a good Iowa team Feb. 25, and winning a thriller at Ohio State on Feb. 21. Not only is this team positioned for a No. 1 seed in the NCAA Tournament, they could be the top overall seed at this rate.

Unlike their counterparts, Michigan has no such issues with injuries. Hunter Dickerson, Isaiah Livers and Franz Wagner are leading the charge with 13.3 or more points per game each and 6.2 or more rebounds per game apiece. Wagner and Dickinson also average at least one swat per outing, and they're all very good free-throw shooters, as well.

I don't like the fact the Illini have been so mum on the status of Dosunmu for Tuesday's game, but it's still rather early as of Monday afternoon, the time of publishing. If you're willing to risk Dosunmu will be in the lineup, bet the line early and get in on Illini catching over four buckets in this marquee game.

However, I like a little more certainty, rather than rolling the dice, and Michigan has just been playing great basketball, especially on its home floor. They'll get it done in this potential preview of the Big Ten Tournament Championship Game.

WHERE TO BET ILLINOIS-MICHIGAN