A must-win game in the Big Ten sees the Indiana Hoosiers fighting for March Madness life against the Michigan State Spartans. Tip is set for 8 p.m. (ET) and will air on the Big Ten Network.

The Michigan State Spartans are home favorites, given a -3-point spread. The Spartans haven't covered the spread well this season, just 7-16 on the ATS this season. Indiana is split on the ATS with a 12-11-1 record. 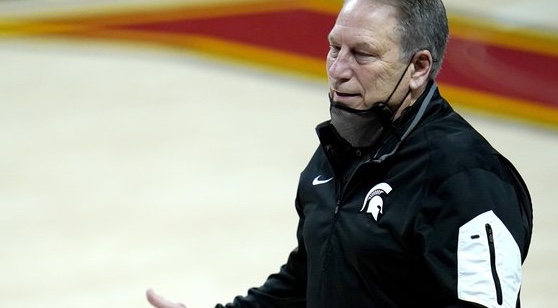 The Michigan State Spartans are fighting to get into March Madness, winning three of its last four games including against Indiana. (AP)

The Indiana Hoosiers are in desperation mode, so expect Trayce Jackson-Davis to take over. This is especially true with Armaan Franklin out oof the game, which also means Aljami Durham will need to step up as well.

Jackson-Davis seems to struggle with double teams, so expect Michigan State to send plenty of bodies into the post whenever TJD touches the ball. The two strengths for Indiana are attempted free throws and blocked shots. Indiana ranks 10th nationally in free throws attempted per game, although they only hit 66.8% of their shots.

The Hoosiers have lost three straight games, including four of their last five. They have also lost two straight road games.

Michigan State is coming off a tough loss to Maryland, now returning home in a very winnable situation. Josh Langford has become the most important Spartan in recent games, taking over as the clear veteran leader and climbing into the double-digit point total category. In layman's terms, he has taken over for leading this team on the court.

He has scored 11 points or more in five of his last seven games. Despite his recent dominance, Joey Hauser and Aaron Henry lead the team in points per game. Henry is averaging over 15 points per game, becoming the most consistent scorer for Michigan State this season.

Michigan State should cover this game at home, as the Spartans are gaining momentum despite a road loss to Maryland. Indiana is struggling to maintain leads in games, while also finding consistency in going scoreless for long spurts. An example is Indiana failing to score four or more points in the final 4:30 against Michigan.

With the concern of Indiana playing consistent basketball, Michigan State at -3 should be safe. Michigan State has been anything but consistent this season however, despite the recent success. If you are weary on taking a winner, the point total should go OVER. The Spartans should touch 70 points, while the defense isn't reliable enough to limit Indiana to under 59.

WHERE TO BET INDIANA-MICHIGAN STATE