The Michigan Wolverines (18-2, 13-2 Big Ten) look to rebound after a woeful performance last time out when they host the rival Michigan State Spartans (14-10, 8-10) at Crisler Center in Ann Arbor, Mich. on Thursday. The game begins at 7 p.m. ET on ESPN.

Michigan suffered a stunning loss at home against Illinois on Tuesday night in a Top 5 battle in Ann Arbor. It wasn't stunning so much that they lost, but how they lost. The Fighting Illini ran them out of the building, routing the Wolverines 76-53 as 8.5-point underdogs.

Michigan was never covering at any point during the game, and they shot just 35 percent (17-of-49), while hitting just 2-of-7 from behind the three-point line. Illinois, on the other hand, shot lights out, knocking down 47 percent (30-of-64) of its shots, while nailing six triples and 10-of-14 (71 percent) from the three-throw stripe. And the Wolverines lost to the Illini, who were without National Player of the Year candidate Ayo Dosunmu.

Michigan State has been coming on lately, winning four of the past five games while also going 4-1 ATS during the span. They have racked up signature wins against Illinois and Ohio State, while sweeping games against Indiana, getting themselves back on the bubble for the NCAA Tournament. They still have a ton of work to do, but the Spartans could really help themselves with an upset of their rivals. 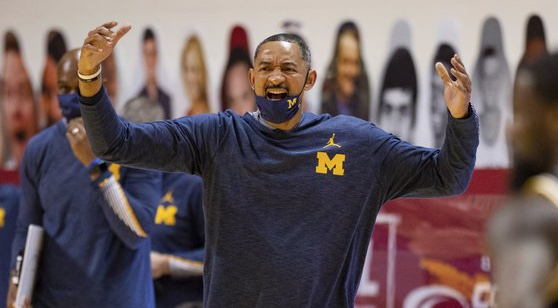 The Michigan Wolverines are coming off their first loss at home on Tuesday night, beaten by 23 points. (AP)

Sparty won 64-58 at Breslin Center in East Lansing over Indiana, covering a 3.5-point number as the UNDER (135) connected. That's been the rule lately, as they're 4-1 ATS in the past five, with the UNDER hitting in each of the past three outings.

This will be the first of a two-game home-and-home set with the Wolverines, as they also face Michigan on Sunday at 4:30 p.m. ET on CBS.

While Michigan State heads into this one on a roll, they haven't really stacked covers lately. After straight-up victories, they're just 3-8 ATS in the past 11. And they're 2-7 ATS across the past nine on the road, while also going 2-7 ATS in the previous nine against teams with a winning home mark. Michigan certainly checks off that box.