Oklahoma State is playing just about as well as anyone in the Big 12 right now. They registered a home-and-home win and cover sweep against rival Oklahoma on Feb. 27-March 1, winning outright as underdogs both times.

Overall, the Cowboys have won five in a row since a 78-66 loss at Kansas, and they have covered four in a row. They have had a flare for the dramatic lately, too, winning two of the past three in overtime, with four victories in OT just since Jan. 2, all within conference.

Like OK State, Baylor suffered its most recent loss to Kansas. The Bears fell 71-58 in Lawrence on Feb. 27, but rebounded with an impressive 94-89 overtime win at West Virginia on Tuesday as 3.5-point favorites. On its home floor, Baylor has been on fire, winning all nine of its games while going 5-4 ATS. 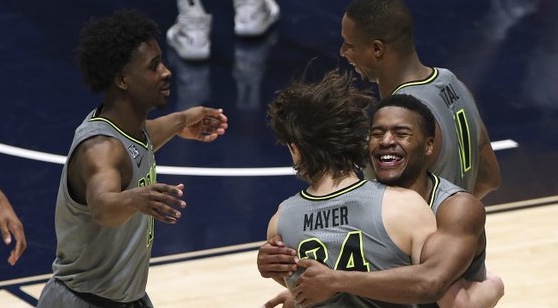 The Baylor Bears are coming off an overtime victory against the West Virginia Mountaineers, seemingly back on track. (AP)

OK State will look to carry over the momentum from their home-and-home sweep over Oklahoma, heading down to Waco for another marquee game. The victories over the Sooners likely make them a lock for the NCAA Tournament, but a win over Baylor could really boost their resume and help out potential seeding.