Thursday’s backend of an ESPN doubleheader of college basketball betting action sends the No. 15 Texas Longhorns on the road to face the No. 16 Oklahoma Sooners at Lloyd Noble Center. Tip-off for this Big 12 clash is slated for 9 p.m. (ET).

Texas has followed a win with a straight-up loss in each of its last five games while going 2-2-1 against the spread. It did cover as a 12-point road favorite in Tuesday’s 14-point win over Iowa State. The total has gone OVER in four of its last six games.

The Longhorns lost to Oklahoma by one point as three-point home favorites on Jan. 26. Yet, they have a 5-1 record ATS in their last six road games against the Sooners. Oklahoma has dropped its last three games SU and it has failed to cover in five of its last six outings. The total went OVER in recent back-to-back losses to Oklahoma State. It has gone OVER in four of its last six games.

The total has also gone OVER in six of the Sooners’ last nine conference games. They have a 6-1 SU record in their last seven games at home. 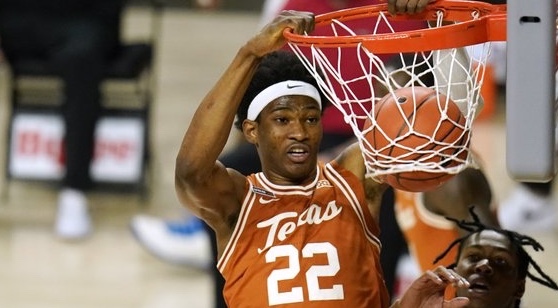 Forward Kai Jones scored a season-high 17 points off the bench in Tuesday’s win with four Longhorns ending that game in double figures.

Junior guard Andrew Jones continues to lead Texas in scoring with 14.8 PPG. Yet, he has failed to reach that average in each of his last four starts. Guards’ Courtney Ramey (13.7 point) and Matt Coleman III (12.8 points) are two more key contributors on offense.

The Longhorns are averaging 75.1 points with 39.3 total rebounds. They are shooting 44.7% from the field and 34.4% from three-point range. Texas is allowing an average of 68.5 points per game. This average has climbed to 72.8 points over its last four outings.

The Sooners lost back-to-back games to Oklahoma State by a combined eight points. This followed a stunning five-point loss to Kansas State as 10-point road favorites.

Senior guard Austin Reaves continues to set the pace with at least 19 points in each of his last five starts. He is scoring an average of 17.6 PPG this season while also leading the team in rebounds (5.7) and assists (5.1).

Guard De’Vion Harmon is the Sooners most consistent shooters with a field-goal percentage of 47.4%. Yet, this rate drops to 32.2% from three-point range. Oklahoma is scoring 75.6 PPG and shooting 44.1% from the field. Its conversion rate beyond the three-point line is 33.5.

When it comes to playing defense, the Sooners matchup well with an average of 69.1 points allowed. They have given up 78.3 PPG during the current three-game slide.

I had Oklahoma winning this game when the two teams were set to play in Norman on Feb. 16. Since that point, I would have to give the slight edge to Texas in this make-up game. It's hard to see the Sooners losing four straight, but I'm not all that confident they can pull off the sweep against their bitter rivals this season.

I'm much more comfortable betting the OVER in Thursday’s matchup. Each of these teams has the ability to put points on the board and defense could take a backseat with each team gunning for a big win.

WHERE TO BET TEXAS-OKLAHOMA