The No. 21 Virginia Cavaliers close-out play in the ACC regular season on the road against the Louisville Cardinals. Game time from KFC Yum Center is set for 4 p.m. (ET) on ESPN2.

Virginia goes on the road as a three-point favorite. The betting line for this game’s total has been set at 124.5 points. The Cavaliers snapped a straight-up three-game slide with Monday’s 11-point win at home against Miami. However, they have failed to cover against the spread in their last four outings after closing as 15-point favorites.

Louisville has strung together a trio of victories (SU and ATS) in its last four outings. This includes a big seven-point road win against Duke in overtime as a five-point underdog last Saturday. The total has stayed UNDER in four of its last six games.

The Cardinals are 9-1 SU at home this season but they slip to an even 5-5 ATS. They have covered in their last three home games with the total staying UNDER in all three contests. 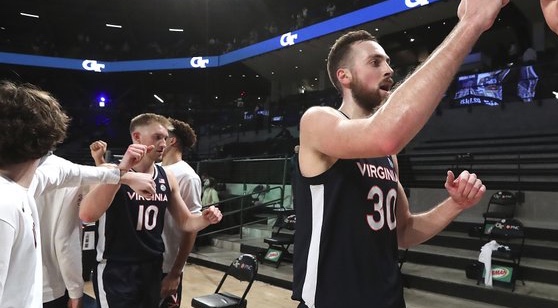 The Virginia Cavaliers are looking for a key win away from home after dropping three of their last four games, including two straight on the road. (AP)

Two of Virginia’s recent losses were to Florida State and Duke on the road. The Cavaliers are 1-3 ATS in their last four road games. They trail the Seminoles by one game in the ACC standings at 12-4 SU in conference play.

Sam Hauser’s 18 points helped pace the win over Miami. The senior forward has now eclipsed his 15.5-point scoring average in each of his last three starts. Forward Jay Huff leads the team in rebounds (7.0) while averaging 13.3 points per game.

The Cavaliers are scoring an average of 68.5 PPG while shooting 48% from the field. They are converting on 39.2% of their shots from three-point range and pulling down 31.6 rebounds a game.

Defense has always been the strong suit of this team. While Virginia did give up 81 points in that recent loss to Florida State, the team’s season average for points allowed stands at 60.2.

Wednesday’s road game against Virginia Tech was cancelled to give the Cardinals some added rest for Saturday’s big test in their regular season finale.

Carlik Jones came up big in the win against Duke with 25 points, including seven points in overtime. The senior guard has been the Cardinals’ leading scoring all season with an average of 17.6 PPG.

The Cardinals are averaging 69.2 points a game while holding opposing teams to 66.2 points at the other end of the court. They are shooting 44.2% from the field and 30.7% from three-point range.

Inside the Stats – Virginia Cavaliers

Inside the Stats – Louisville Cardinals

Virginia has dominated this series SU over the past several seasons. It should be able to come away with another SU victory as the better overall team but it will not be easy given Louisville’s current form. The Cardinals also benefit from playing this game on their home court.

That being said, I am taking the home team and the points in this one. Each of these teams rely much more heavily on defense than your typical ACC team. With the total line adjusted for this fact, I am also taking Saturday’s game to go OVER the current line.