The Florida Gators close out the regular season this Sunday with a trip to Thompson-Boling Arena to face the Tennessee Volunteers. Tip is slated for 12 p.m. (ET) with ESPNU carrying the game nationally

Tennessee has been opened as a four-point home favorite for this SEC tilt. The betting line for the total opened at 134.5 points.

Florida slipped to 9-6 straight-up in SEC play with Wednesday’s two-point loss to Missouri as a four-point home favorite. It is now just 2-4 against the spread in its last six games. The total has stayed UNDER or closed as a PUSH in all six outings.

One of those nine wins came in a lopsided 26-point rout of Tennessee on Jan. 19. The Gators closed as +8.5-point home underdogs. This win snapped a four-game losing streak to the Volunteers both SU and ATS.

Tennessee is 9-7 SU in conference play after losing three of its last five games SU. With a five-point loss to Auburn last Saturday as an 8.5-point road favorite, it is now 4-8 ATS over the last 12 contests. The total has stayed UNDER in three of the last five games.

The Volunteers are 12-3 SU at home this season but just 3-7 ATS in their last 10 home games. The total has gone OVER in six of its last eight games played at home. 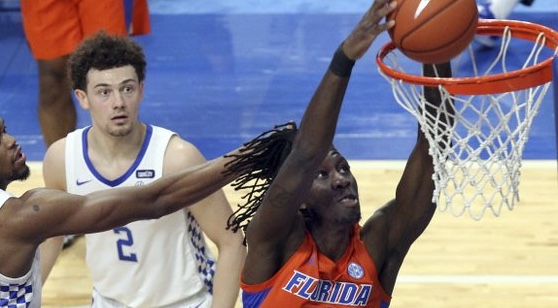 The Florida Gators enter their game against the Tennessee Volunteers split on the ATS this season, covering 10 of 20 games. (AP)

In the absence of forward Keyontae Johnson, who was lost early in the season, sophomore guard Tre Mann has led the way with 15 points and 5.7 rebounds a game. He has exceeded those averages in his last three starts with a combined 61 points and 24 rebounds.

Forward Colin Castleton (12.8 points) and guard Tyree Appleby (10.9 points) have also been a big part of Florida’s success this season. The Gators are averaging 75.6 points and 35.5 rebounds a game. They are shooting 47.2% from the field and 35.9% from three-point range.

Defensively, Florida has allowed an average of 70 points per game this season. That average has dropped to 64.8 points in its last four contests.

Tennessee has taken a balanced approach to scoring this season with five players averaging at least nine points a game. Leading the way has been Jaden Springer with 12.8 points per game.

The freshman guard has surpassed that average in four of his last five starts. He is shooting 49.2% from the field and 47.4% from three-point range. Guard Victor Bailey Jr. is next on the list with 11.3 PPG.

The Volunteers are averaging 72.8 points while connecting on 44.4% of their shots from the field. This rate drops to 34.5% outside the three-point line. They are pulling down a total of 35.7 rebounds a game with guard Josiah-Jordan James (5.9) leading the way. Tennessee is giving up an average of 63.1 PPG this season.

Inside the Stats – Florida Gators

These two conference foes matchup extremely well against one another. Tennessee was a bit overrated earlier in the season. However, I still expect the Volunteers to return the favor at home to even the season series. Fresh in its memory is one of the team’s most embarrassing performances of the season against the Gators on the road.

Take the home team and lay the points in this one. I also expect the total to stay UNDER the current line. It has stayed UNDER in four of the last five games between the two, and defense should play a big role this time around as well.

WHERE TO BET FLORIDA-TENNESSEE