The Michigan Wolverines take on rivals the Michigan State Spartans in the second game of a back-to-back series. The conference clash is set for 4:30 p.m. (ET) and will air on CBS.

The Michigan Wolverines enter as the road favorites, given a -9-point spread. Michigan has done a good job of covering the spread this season, entering with a 16-5 ATS record. Michigan State has failed to cover the spread in 17 of 25 games. 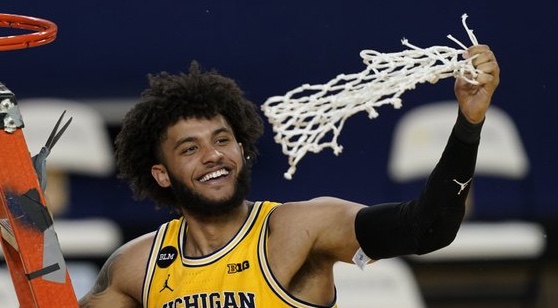 The Michigan Wolverines won the Big Ten title with a victory over the Michigan State Spartans this past Thursday. (AP)

The Wolverines are seemingly back on track with a solid win over Michigan State after losing to Illinois by 23 points in Ann Arbor. The Wolverines seemingly have a No. 1 seed locked up for March Madness this season, but will still be looking to play spoiler to their rivals season.

Hunter Dickinson leads the team in points per game with 14.4, but it was Franz Wagner who scored a team-high 19 points in the win over the Spartans. What makes Michigan so deadly is the three-point shooting, paired with the defensive rebounding.

The team has won eight of its last nine games, winning six of its last seven games on the road. Michigan State will have its hands full, fighting for its March Madness life.

What an uphill battle the Spartans have. If Michigan State wants to win then the offense needs to pick back up prior to the Maryland loss. The Spartans have failed to score 65 points in three straight games, beginning with a road trip to College Park, Maryland. Before facing the Terrapins, Michigan State scored 71 points or more in three straight games.

The Spartans won all of those games, so offense should be the focus here. Easier said then done however, as the offense has struggled mightily for Tom Izzo's team all season. Aaron Henry is a silver lining, scoring 15.4 points per game with 5.6 rebounds as well.

The effort Josh Langford showcases has been wonderful to watch as well. He is finally up to 10 points per game, and the emotional spark this team needs on the court - someone to lead them. He only scored six against Michigan though, and shouldn't have to be the second-highest leading scorer on the team.

Rocket Watts, Julius Marble, Gabe Brown, Joey Hauser - really anyone else needs to step up and score more than eight points in the game. Mady Sissoko produced a strong point total in just six minutes of action, so maybe Izzo leans on him a bit more in game two?

It's hard not to back Michigan here, the clear and better team winning bettors money more times than not this season. The Spartans will more than likely get in to March Madness without a win here, as this seems to be too tall of a task to achieve. Playing in East Lansing does make the spread a bit interesting, along with the implications of the game.

Michigan State knows they are a lock for March Madness if they win, so expect them to play well at home. I'm not bold enough to take the Spartans straight, but covering the large spread or even leaning on the point total going OVER might be the take. Expect the Spartans to leave it all on the line, which means keeping pace with the Wolverines but ultimately falling short.