An early Big Ten game sees the Wisconsin Badgers face the Iowa Hawkeyes. Tip for the Sunday afternoon game is set for 12:30 p.m. and will air on FOX.

The point total is set at 144.5, which slightly favors the UNDER. Wisconsin has gone UNDER the point total 13 times this season, while Iowa is split at 13-13. The Hawkeyes went OVER a lot to begin the year, but oddsmakers typically set high lines for this market with Iowa. 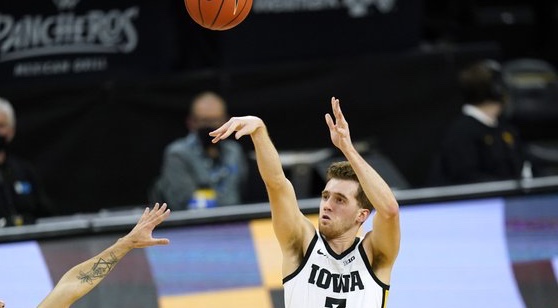 Iowa Hawkeyes guard Jordan Bohannon is often overlooked in this prolific offense, but averages over 10 points per game this season. (AP)

The Badgers are struggling bad, losing two straight which includes four of five and seven of 11. The Badgers have gone seven straight games without touching 70 points, although they did reach 69 over their last two losses. Its evident the team knows the offense needs to pick up, scoring just 69.8 points per game which ranks 219th in the nation.

The defense and experience makes this team a March Madness threat still, allowing just 63.5 which ranks 32nd. D'Mitrik Trice has taken over as the clear leader of this team in terms of point production, now averaging up to 14 per game.

Iowa's offense is one of the best nationally, as it will be insanely difficult for Wisconsin to keep pace. Even with Jack Nunge and CJ Fredrick not playing, this offense can get points in a hurry.

Luka Garza is a Wooden Award lock at this point (-10000 odds to win), while both Joe Wieskamp and Jordan Bohannon average double-digit point totals. Bohannon is the name to watch as March progresses, as Iowa will need to rely on him for very crucial shots in big moments of games.

Keegan Murray is often overlooked in a crowded offense, but he produces nicely as well. The Hawkeyes average 19.3 assists per game, which ranks first in the nation. They also make 39.9% of their three-pointers (ranks fourth in nation) and grab 40.6 rebounds per game (ranks 12th in nation).

Iowa is the better team, also playing with much more momentum. Add that with the ATS odds favoring Iowa's 15-11 over Wisconsin's 11-14-1, and Iowa's 13-2 record at home, the spread is fine to take here. There's more conviction in it then the point total, which has fluctuated for Hawkeye bettors this season.

The point total for this game is much lower then what most are used to seeing for an Iowa game, but don't fall for the bait. Wisconsin is still struggling on offense, but almost touching 70 twice does bring more conviction to the OVER. Try not to overthink this and go with the better team, at home, with more momentum and the better odds to play on.