Thursday’s Big 12 Tournament betting action opens with the No. 5 seeded Oklahoma State Cowboys taking on the No. 4 West Virginia Mountaineers. Game time on ESPN from T-Mobile Center in Kansas City is set for 11:30 a.m. (ET).

West Virginia gets the opening nod in this quarterfinals matchup as a three-point favorite. The total line has been opened at 151.5 points.

Oklahoma State ended the regular season with a five-point road win against West Virginia as a 10-point underdog. It went 6-1 straight-up in its last seven games while covering against the spread in its last six games. The total has gone OVER in its last five outings.

The Cowboys’ snapped a three-game losing streak (SU and ATS) against the Mountaineers with Saturday’s upset. The total went way OVER 147 points in that 85-80 victory and it has gone OVER in six of the last eight meetings.

West Virginia also lost to Baylor by five points as a four-point home underdog as part of a 4-2 SU (3-3 ATS) record in its last six games. The total has gone OVER in its last three games.

The total has actually gone OVER in 10 of the Mountaineers’ previous 12 contests. They are 4-3 SU with a 2-4-1 record ATS in their last seven games played in March. 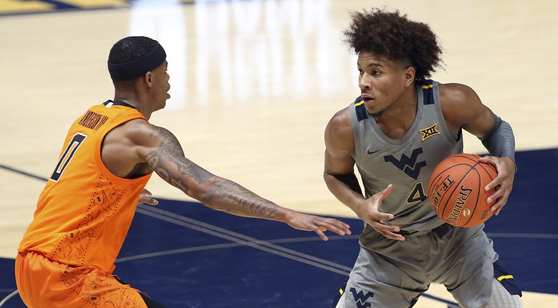 West Virginia and Oklahoma State will be meeting in a quick rematch when the pair meet on Thursday. (AP)

Freshman guard Cade Cunningham was just named the Big 12 Player of the Year. However, an ankle injury kept him out of the season finale. Guard Avery Anderson III came up big in that game with 31 points.

Cunningham led the way in scoring all season long with an average of 19.7 points per game. He was second on the team in both rebounds (6.3) and assists (3.5). The team’s official injury list has him listed as questionable along with guard Isaac Likekele which is something to keep an eye on.

The Cowboys, as a team, are averaging 76.7 points and 38.7 rebounds a game. They are shooting 46.6% from the field and 33.8% from three-point range. Defensively, Oklahoma State has allowed an average of 72.3 PPG this season. It has given up at least 75 points in each of its last four games.

West Virginia has to be somewhat concerned with Saturday’s loss which cost it a shot at earning the second seed in the conference tournament.

Guard Miles McBride (15.3 points) and forward Derek Culver (14.8 points) have been the top two scorers this season. McBride is shooting 41.2% from three-point range with Culver pulling down an average of 9.8 rebounds a game.

The Mountaineers are scoring an average of 77.6 points with 38.4 rebounds a game to matchup extremely well against Oklahoma State. They are shooting 42.8% from the field and 35.9% outside the three-point line.

West Virginia gave up 94 points in that recent loss to Baylor ahead of allowing 85 points in Saturday’s loss. The season average for points allowed stands at 72.1.

Inside the Stats –West Virginia Mountaineers

I'm expecting Cunningham to be back in the lineup on Thursday in what should be another tight matchup. With the Cowboys getting points in a neutral-site setting, I am leaning that way with my ATS play for this game.

I'm more excited about betting the OVER on the total line. It easily went OVER in both of the games between the two this season. The line closed at 144 points in West Virginia’s 87-84 victory at home against the Cowboys on Jan. 4.

WHERE TO BET OKLAHOMA STATE-WEST VIRGINIA