The Longhorn Network is covering Tuesday night’s Big 12 tilt between the Oklahoma Sooners and the No. 14 Texas Longhorns. Tip-off from Frank Erwin Center in Austin is slated for 8:30 p.m. (ET)

The Sooners will wrap up a brutal three-game gauntlet in conference play after losing to Baylor by 10 points as road underdogs and beating Iowa State by 13 points as home favorites. They are 2-1 straight-up in Big 12 play as part of an overall record of 12-3 this season. Getting past their bitter rivals on the road would be a major plus on the resume.

Texas was stunned by Oklahoma State this past Saturday in a 13-point loss on the road as a three-point favorite. This snapped a SU six-game winning streak as part of the Longhorns’ 12-3 mark on the year. With the anticipated slide in the polls, this game takes on some added meaning for their tenuous national ranking.

There are compelling reasons to bet either side of this rivalry showdown. The one that sticks in my head the most is the road team’s four-game winning streak in this series both SU and ATS. While it is hard to see Texas losing two games in a row, I believe the Sooners get the edge in momentum coming into this contest. So much so, my best bet is Oklahoma SU on the money line.

Along with the SU 5-1 record in their last six games, the Sooners have gone 4-2 against the spread during that same span. They still managed to cover with the 12 points against Baylor and I was impressed with the way they rolled over Iowa State on Saturday after trailing at the half by four points. The total has gone OVER in six of Oklahoma’s last eight contests.

Forward Tanner Groves leads the team in both points (14.3) and rebounds (6.0). Guard Umoja Gibson is next on that list with 13.1 points per game. He is easily the Sooners most reliable free throw shooter at 95.1% on a team-high 41 attempts.

Guard Elijah Harkless (10.4 points) is the most consistent shooter overall with a 45.2 field goal percentage while shooting 36.4% from three-point range. Guard Jordan Goldwire and forwardJalen Hill are each adding at least nine points a game to Oklahoma’s 74.7-point scoring average.

The Sooners are shooting an impressive 51.2% from the field. This drops to 36.3% from outside the three-point line. They are pulling down 33.2 rebounds a game and holding opposing teams to 62.1 PPG.

Texas is 2-1 both SU and ATS in the Big 12 after beating West Virginia on Jan. 1 by 15 points as a 12-point home favorite in the conference opener. The Longhorns have not been a solid betting team on the year at 7-8 ATS through 15 games. The total has stayed UNDER in six of their last eight outings.

In the absence of a dominant scorer, Texas runs five deep with players averaging at least nine PPG. Forward Timmy Allen is at the top of that list with 11.9 PPG. He also leads the way in rebounds with 6.9 a game. Forward Tre Mitchell is second in scoring with 9.9 points as part of the Longhorns’ scoring average of 70.7 PPG.

Guard Courtney Ramey may be the most exciting player in the lineup with 45% shooting from the field and 38.2% shooting from three-point range. Guards’ Marcus Carr (9.7 points) andAndrew Jones (9.6 points) have also been instrumental in this team’s success this season.

Texas is shooting 46.4% from the field and 33.2% from three-point range. Sporting an average of 34.1 rebounds a game, 10.5 are on the offense end of the court. The Longhorns are allowing an average of 53.1 PPG as one of the stingiest defensive efforts in the nation this season. 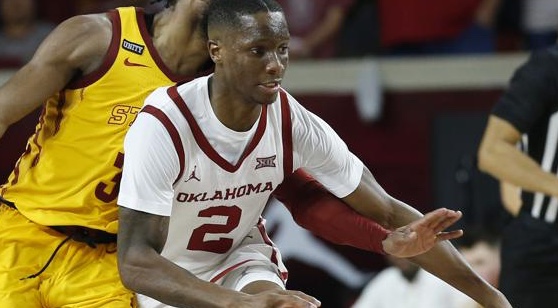 Oklahoma has covered the spread in three straight games when playing as the underdog. (AP)

Betting against Texas at home comes with a certain level of risk with its current SU 10-game winning streak at Frank Erwin Center. However, Oklahoma has covered in six of its last nine games on the road. The Sooners have covered in four of their last five road games against Texas.

A possible side bet in Tuesday’s matchup would be the UNDER on the total line. It has stayed UNDER in 10 of the last 15 meetings. I actually see the final score being higher than expected this time around.