The Red Storm limp in on a two-game losing streak, falling 66-60 to Seton Hall at home last time out on Saturday. St. John's is also 1-4 SU/2-3 ATS across the past five outings, hitting the UNDER in each of the past three. The Johnnies managed to hit just 29%, or 22-of-75, from the field last time out against the Pirates. Yes, that's 53 missed field-goal attempts. That includes a 5-of-19 performance from behind the 3-point line, hitting 26%. The good news is that St. John's at least took decent care of the basketball, turning it over just nine times while blocking six shots.

The Pirates were able to outrebound the Red Storm 54 to 38 last time out, which was super helpful keeping possessions alive since Seton Hall turned it over 17 times. The Pirates had three players go for 10 or more points, picking up the slack for leading scorer Jared Rhoden, who was just 3-of-19 with 10 points, eight assists and four rebounds to go along with a disappointing seven turnovers. Myles Cale saved the Pirates, going for 21 points, nine rebounds and two assists while dropping in two triples, the only player with more than one 3-pointer.

St. John's is on a serious slide, but straight up and against the number lately. It is 2-5 ATS in the past seven games overall, while going 3-11 ATS across the past 14 outings. In addition, they're 0-3 SU inside the conference in road games, while going just 1-2 ATS. The OVER is 2-1 in those three road league games, too.

The 60 points scored was also the second-lowest point total of the season, with only a 57-point effort against Pittsburgh on Dec. 18 as a worse showing. The UNDER is 3-0 in the past three outings after an OVER run of three straight games from Jan. 5-12. The totals have been rather up and down lately for the Red Storm.

The Pirates snapped a two-game losing streak with the win at St. John's in the front end of the home-and-home, cashing as a one-point favorite to also snap an 0-3 ATS slide. Seton Hall is just 5-8 ATS across the past 13 games overall, too.

The bad news for the Pirates is that the team's second-highest scorer, Bryce Aiken, will be out for this game due to concussion. He is second only to Rhoden with 14.5 PPG, while posting 2.7 APG, 2.1 RPG and 1.3 SPG, and he has a stellar 35.3 3P%. He hasn't played since dropping 28 points on Marquette on Jan. 15, and he had rolled up 22 or more points in each of the past three games, averaging 24.0 PPG before his injury. He'll be a big loss, especially as well as he has played. 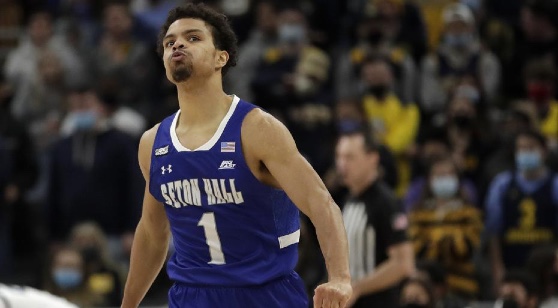 Seton Hall has covered just five of the past 16 games at home. (AP)

Neither of these are playing very good basketball lately, although the Pirates are trending a little more in the right direction. However, Seton Hall will be without Aiken, who is the team's second-leading scorer, so that's going to be a problem. With both teams struggling to score the basketball lately, the best bet on the board is the UNDER.

St. John's has really struggled to cover lately, too, especially against winning teams. Playing on the road at Seton Hall, albeit a short trip across the Hudson River to New Jersey, won't do the Johnnies any favors. However, the Pirates have covered just five times in the past 16 at home, and they're going to be a bit disjointed on offense minus Aiken. They should still pick up the win, but St. John's is a good play catching points.