The Wildcats have racked up five consecutive victories, each inside the conference, while winning six in a row to begin league play this season. Arizona is coming off a 96-71 victory at California, posting a season-high point total in Pac-12 play. Arizona hit 31-of-64 from the field, or 48%, while knocking down 11-of-27, or 41%, from behind the 3-point line. And while Cal turned it over just four times to eight for Arizona, the Wildcats made up for it with a 42-to-34 rebounding advantage. Arizona had five players go for 10 or more points, including a double-double from Christian Koloko with 19 points and 13 rebounds while posting three blocked shots.

The Bruins have posted eight victories in the past nine games, with just an overtime setback against Oregon on Jan. 13 as the only blemish since league play started. The cover at Colorado on Saturday, a 71-65 win as a 3.5-point favorite, was the team's first in six games after an 0-4-1 ATS slide. UCLA hasn't covered consecutive games since opening the season with a pair of covers against Cal State Bakersfield and Villanova on Nov. 9-12.

The big story for Arizona is the questionable status for F Azuolas Tubelis, who turned an ankle in Thursday's game against Stanford. He missed the Cal game, although the Wildcats didn't skip a beat in his absence. Still, facing the Bruins without him would be quite different than facing off against the mediocre Cardinal without him.

Arizona has registered five consecutive victories, going 3-1 ATS across the past four games overall. It's looking for a third straight cover for the first time since a 5-0 ATS run from Nov. 21-Dec. 11. The OVER result against California last time out was also the first in four games.

UCLA scratched out a pair of victories at Utah and at Colorado Thursday and Saturday, hitting the UNDER in each of the outings. The last time the Bruins faced a ranked team was Nov. 23, 10 games ago. That was an 83-63 beatdown at the hands of the Bulldogs. In fact, that was one of just two meetings against a ranked foe to date. 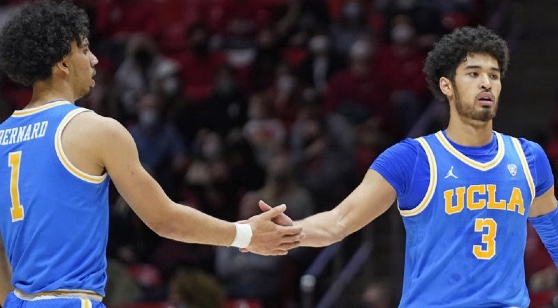 UCLA is 6-1 ATS in the past seven games as an underdog. (AP)

UCLA has dominated this series lately, going 5-0 SU/ATS across the past five meetings, while the UNDER has connected in five of the past seven in the series. UCLA swept the season series against Arizona, including a 74-60 win at Pauley Pavilion on Feb. 18, 2021 in front of zero fans due to the COVID-19 global pandemic.

While Arizona has been humming along lately, and look like a good bet to win this game outright when it is whole. However, the health status for Tubelis makes Arizona a risky early bet. If he is ruled out, Arizona is a much riskier play. If Tubelis is given the green light to play, the Wildcats are a bargain as a mid-level money line play. I like Arizona to win this game straight up, and the UNDER has been the rule in this series lately.