The Blue Demons were paddled 60-47 at Creighton last time out on Saturday, and the point total was a season low. DePaul shot just 35% from the floor, going 19-of-54, or 35%, while hitting just 3-of-13, or 23%, from behind the 3-point line. Creighton also had twice as a many trips to the free-throw line (18 to 9), while the Bluejays outrebounded the Blue Demons 39-29 while committing two fewer turnovers. DePaul did a good job with seven blocked shots, holding its own defensively, but they suffered a seventh loss in eight conference games.

The Wildcats bounced back from a loss Wednesday at home against Marquette, rolling up an 85-74 victory at Georgetown while just missing the cover as 13.5-point favorites. The 85-point outburst was actually the highest total since dropping 100 on Howard in a non-conference game at Finneran back on Nov. 16. Villanova has failed to cover the past two games, and they haven't had three straight non-covers at any point this season.

One huge story to watch is Big East potential First-Team player Javon Freeman-Liberty's health status. He has been dealing with a groin injury, and he hasn't played since suffering the injury Jan. 12 against Seton Hall. With Freeman-Liberty in the lineup, the Blue Demons are a respectable 2-2 ATS with the OVER hitting in the past four outings he has played. Without him, the UNDER is 2-1 in three games with JFL on the shelf.

Villanova has failed to cover the past two games, but they haven't had three or more consecutive non-covers since an 0-5 ATS run from Nov. 24-Dec. 14, 2019. In the first meeting with the Blue Demons, a game which Freeman-Liberty played, the Wildcats still steamrolled DePaul 79-64 in Rosemont while covering a 10-point spread as the OVER connected.

The Wildcats have covered six of the past eight games overall, while going 4-1 ATS in the past five games at home. They're also 6-1 ATS in the past seven against teams with a winning overall record. Villanova has a stellar 41-19-2 ATS mark across the past 62 following a non-cover, too.

For totals, the OVER is 9-1-1 in the past 11 games against teams with a winning overall record, although the UNDER is 4-1 in the past five at home. 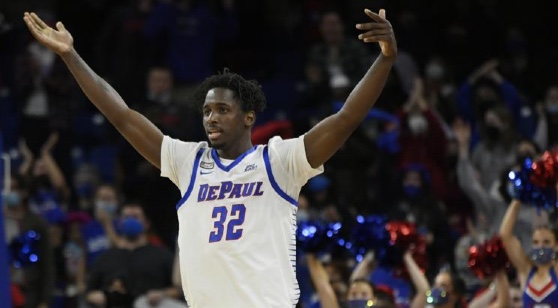 INSIDE THE STATS - DEPAUL BLUE DEMONS

The Blue Demons travel to Finneran Pavilion in Villanova hoping that the 21st time is a charm. Yes, they're 0-20 SU in the past 20 meetings dating back to Jan. 3, 2008, although the Blue Demons are a respectable 9-11 ATS during the span. DePaul is 0-2 ATS in two games as a double-digit underdog this season, including the first meeting with Villanova on Jan. 8. It is also 0-4 ATS in the past four as an underdog of 10 or more points.

Villanova could catch a huge break if DePaul's leading scorer Freeman-Liberty is sidelined for a fourth consecutive game. He has missed the past three due to a groin injury, and if he is unable to go, the Blue Demons do not have a chance in h-e double hockey sticks, especially on the road. Still, 16.5 points is an awful big number in a conference game, and 'Nova is 0-2 ATS in the past two as 13.5-point favorites. As a favorite of 11.5 or more points, the Wildcats are just 3-4 ATS across the past seven. Villanova is going to win, likely by double digits, but DePaul should hang on for the cover.