The Bluejays is looking to turn things around after dropping the past two games by 10 or more points. Creighton fell to Xavier by a 74-64 score on Saturday as a 1.5-point underdog as the UNDER connected, while also getting drummed at Butler last Wednesday by a 72-55 count as a 2.5-point favorite.

Creighton heads to Hartford looking to go a perfect 4-for-4 against UConn since joining the Big East Conference, although it has covered just one of the three meetings. That cover occurred last season on March 12, 2021 in Omaha in a 59-56 win, which is the only UNDER in three meetings, too.

UConn has registered five consecutive victories. A 57-50 win at DePaul resulted in a non-cover as a 9.5-point favorite, and that snapped a 3-0 ATS run. The Huskies are now 5-2 ATS in the past seven outings overall, too. The UNDER connected in that game against the Blue Demons, and that ended a 6-0 OVER run for the Huskies.

More on totals, the OVER is 24-8 in the past 32 games at home for Connecticut, while going 4-1 in the past five games following a straight-up win. The OVER is also 19-7 in the past 26 outings in a non-cover, too. And, for what it's worth, the OVER has hit in five straight games on a Tuesday. 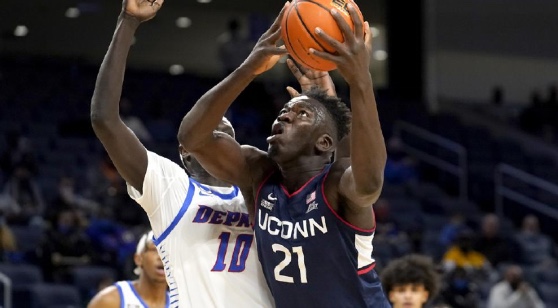 Connecticut has posted a 5-2 ATS mark across the past seven outings overall. (AP)

Creighton hasn't been playing very well lately, losing two straight games, and four of the past six outings overall while splitting those games against the number. In those four straight-up losses, the Bluejays have dropped each of those outings by seven or more points, too. The Bluejays have balanced scoring, with four players averaging double digits, while enjoying three players with five or more rebounds per game. None of that was on display last time out against Xavier, however, as the team misfired on 33 of its 56 field-goal attempts, including 15 misses from downtown. Creighton is averaging 14.4 turnovers per game across the past 10 games, and that's something they really need to work on.

UConn hasn't lost in regulation since Dec. 18, a total of seven games. While the Huskies had a non-cover last time out on Saturday, the good news is that UConn hasn't had consecutive non-covers since an 0-3 ATS skid from Nov. 25-30 against Michigan State, VCU and Maryland-Eastern Shore, all non-conference tilts. While UConn has had trouble against Creighton since the latter joined the conference, this is the best Huskies team during that stretch. Look for UConn to get it done at home as the OVER connects.