The Huskies of UConn are looking for a bounce-back game after getting tripped up in Hartford by Creighton on Tuesday, 59-55. The Huskies were favored by 10.5 points, but never were covering at any point of the game. UConn shot a dismal 30% (20-of-67) from the field, including an awful 24% (5-of-21) from behind the 3-point line. The good news is that they turned it over just seven times, but they had two fewer rebounds (40-38), and star Adama Sanogo didn't help with a 3-for-10 shooting performance and just eight points. Isaiah Whaley did his best to will the Huskies to a win, dropping in 20 points with six boards and four swats, but it wasn't enough.

For the Wildcats, they're also looking to rebound after being dropped at Marquette by an 83-73 margin as 4.5-point favorites. Villanova is on a 1-4 ATS skid, losing two of those games (both to Marquette) outright. Like UConn, Villanova's top player struggled with his shot last time out, as Collin Gillespie hit just 5-of-15 from the field, although four of the makes were from long distance, and he still ended up with a respectable 16 points. 'Nova had four players with 10 or more points, but they just couldn't stop the Golden Eagles on offense.

UConn will be looking to avoid an 0-3 ATS, which would tie a season long. It also failed to cover three in a row from Nov. 25-30 in a non-conference stretch against Michigan State, VCU and Maryland-Eastern Shore.

It's been lights out on offense lately, averaging just 56.0 PPG over the past two games, so UConn will be looking to bust loose and re-establish themselves offensively. Prior to this lull on offense, UConn had posted 75 or more points in six consecutive games from Dec. 21-Jan. 25.

On the road, UConn is just 2-2 ATS in four true road games this season, failing to cover the number last time on the road Jan. 29 at DePaul. There isn't a lot to glean from the numbers on the road in terms of the total, either, as UConn is 2-2 there, too.

The Huskies are looking to snap a four-game losing streak in this series, last winning at Villanova on March 22, 2014. The last time these teams met Feb. 20, 2021, it was an unsatisfying push at most shops, with UConn on the short end of a 68-60 loss as the UNDER hit. The UNDER has cashed in four straight in this series.

Villanova has lost a pair of games to Marquette over the past five outings, and it is just 1-4 ATS during that five-game span. The defense has performed well lately, but not on Wednesday, with 83 points allowed. That was the highest total allowed by the Wildcats in regulation this season. Villanova coughed up 86 points in overtime at UCLA on Nov. 12.

The Wildcats were 6-0 ATS in a six-game span from Dec. 21-Jan. 16 prior to this five-game skid against the number. The lean is to the UNDER in three of the past five five outings. The OVER hit in the Marquette last time out, and 'Nova hasn't had a back-to-back OVER situation since opening the season 3-0 to the OVER from Nov. 9-16 against Mount St. Mary's, UCLA and Howard.

The big thing to watch for 'Nova is on the injury front. Justin Moore (ankle) and Bryan Antoine (ankle) are each question marks due to ankle injuries. Moore is especially notable, as he is second on the team with 15.1 PPG, while checking in third with 5.0 RPG. He is also second on assists at 2.5, and leads the team with 1.2 APG. If Moore cannot go, that changes things dramatically. 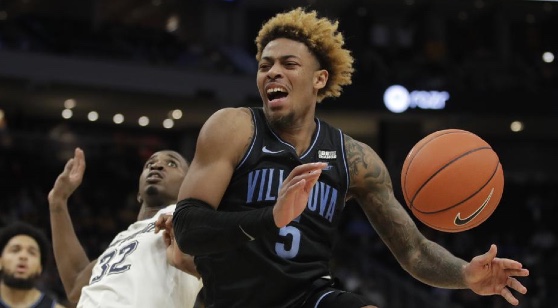 Villanova is 5-1 ATS across the past six games in games in Villanova or Philadelphia. (AP)

The injury concerns for Villanova heading into this one is a big worry for me. While Antoine is simply a depth piece, and not as big of an issue, if Moore cannot play, the Wildcats are going to have problems. He played through the injury against Marquette last time out, hitting just 2-of-11 from the field, including 0-of-7 from behind the 3-point line, so he clearly wasn't 100 percent. Even if he can play, and he is showing ill effects of the injury, that changes things for Villanova.

For the Huskies, Cole and Sanogo are bona fide stars, and the latter is coming off a poor game. He'll be looking to bounce back in a big way, and should help the Huskies to a much-needed victory in this series. UConn is especially attractive as the road team is Whaley can again provide tertiary scoring while serving as a huge presence in the paint. The value is playing UConn.