The Golden Eagles are coming off a dominant performance Wednesday against Villanova, winning 83-73 as 4.5-point underdogs in Milwaukee as the OVER came through. Marquette has won eight of the past nine games overall, while covering nine consecutive outings. The OVER result for the Golden Eagles was a rarity, as the UNDER has connected in each of the previous five outings.

Marquette shot lights out against 'Nova, hitting 54%, to just 38% for the Wildcats. Marquette was sharp from downtown, too, hitting 42% (10-of-24), and they were super efficient at the charity stripe with a 17-of-18 night, or an impressive 94% mark. That made up for the fact the Golden Eagles turned it over 16 times to just 10 for the Wildcats.

UConn has dropped two in a row to Creighton at home and on the road at Villanova Saturday. That's three straight non-covers for the Huskies, too. The good news is that after averaging 56.0 PPG in the two previous games, the UConn offense came alive for 74 in the loss to 'Nova, hitting 50% (26-of-52). Unfortunately for UConn, Villanova was burning it up at 59% (29-of-49) from the field, while cashing in on 21-of-22 (95%) from the free-throw line.

Not only have the Golden Eagles won eight of the past nine games overall, they're on a perfect 9-0 ATS run dating back to their last non-cover on New Year's Day against Creighton. In the first meeting with UConn in Milwaukee, the Huskies came away with a 78-70 win as 5.5-point favorites as the OVER connected.

For totals, the OVER against 'Nova was a rarity. The UNDER is the past six games overall, while going 4-1-1 in the past six on the road. However, the OVER has connected in four of the past five against teams with a winning overall record.

Not only have the Huskies lost two in a row, they're 0-3 ATS across the past three games overall to match a season high (or low, really) for futility against the number. Connecticut hasn't failed to cover in four or more straight games since an 0-6 ATS slide from Feb. 7-25, 2018.

For totals, the OVER has hit in seven of the past nine games overall, while going a whopping 24-9 in the previous 33 games at home in the Nutmeg State. The OVER is also 8-3 in the past 11 games against teams with a winning overall record, while going 5-0 in the past five following a straight-up loss.

In this series, the favorite has connected in four straight meetings, with the road team 7-2 ATS in the past nine in the series. Connecticut has won and covered the past three, with the OVER going 4-1 across the past five in the series. 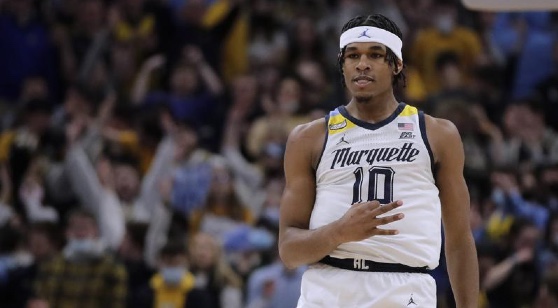 The road team has cashed in seven of the past nine meetings in this series. (AP)

The Golden Eagles have been red hot, while the Huskies have had a cool period lately. Marquette catching three buckets, even on the road, is a huge value until it starts to cool off. Yes, this game is in Hartford, so UConn will have the advantage of a raucous crowd, but that home-court advantage didn't help them last time at the XL Center against Creighton on Feb. 1.

Yes, UConn did win this game, and look dominant in doing so in Milwaukee back on Dec. 21. So you can look at it one of two ways. The Huskies did it once, they'll do it again. Or, the Golden Eagles have a chip on their shoulder and revenge on their mind, and they roll in easily as the hotter team. That's my thought process, and I'll keep fading the Huskies until they get untracked and start ticking off wins and covers on a regular basis again.