Purdue is coming off an impressive 84-68 victory against Illinois last time out on Tuesday in West Lafayette. The Boilermakers have posted six consecutive victories, including an 82-76 win over Michigan last Saturday at home, although they failed to cover the 9.5-point spread as the OVER hit. The Boilermakers hit 52% (30-of-58) from the field, while turning it over just six times, led by Jaden Ivey with 23 points. Purdue also managed to outrebound Michigan by a 31-to-18 clip, but still failed to cover.

Despite a huge rebounding disadvantage and five more turnovers, Michigan managed to keep the game close thanks to outstanding 3-point shooting against Purdue last time out. The Wolverines were 8-of-18 (44%) from downtown, including a pair of triples by Hunter Dickinson. The big man finished with 28 points on 12-of-17 shooting while also swatting a pair of shots. Caleb Houstan also dropped in a pair of threes.

Michigan bounced back from that loss with a narrow 58-57 win at Penn State, but wasn't nearly as efficient shooting the basketball with a 31% (17-of-54) shooting night. Dickinson was still productive with 19 points, 15 rebounds and four blocked shots, but nobody else stepped up to help.

Purdue has alternated covers and non-covers across the past five outings, covering against Illinois last time out. While the Boilermakers are already a 20-plus win team, it has had some difficulty cashing against the number, covering just seven of the past 17 games overall.

The Boilermakers haven't been stacking covers lately, either, going just 2-5 ATS in the past seven games after cashing against the spread last time out. For totals, the OVER has hit in five straight for Purdue, while going 5-1 in the past six games on the road.

In this series, Purdue won the last meeting last weekend, and that snapped a five-game skid against the Wolverines dating back to Jan. 25, 2018. Purdue hasn't won in Ann Arbor since Jan. 9, 2018. Michigan is Purdue's kryptonite when it comes to covering, too, going 0-9-1 ATS in the previous 10 meetings. Purdue last covered against Michigan in a 76-59 win March 12, 2016 in the Big Ten Tournament. The last cover in the regular season came Jan. 7, 2016 in West Lafayette.

The Wolverines haven't had their best season, managing a record just three games over .500 despite lofty expectations for Juwan Howard's team. They did manage to keep Purdue within view in the first meeting, covering like usual in this series. 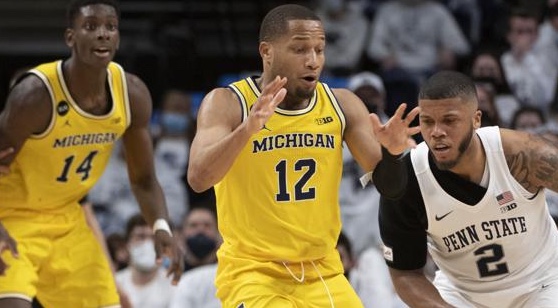 Michigan has cashed in just one of the past five games at home. (AP)

Purdue has posted 21 victories, and this team not only has its sights set on winning the Big Ten conference title, but they're bucking for a No. 1 seed in the NCAA Tournament and a possible national title. Michigan was expected to be doing the same things, but it is struggling to hang on, and it might be headed for the NIT barring a huge turnaround.

The Wolverines have dominated this series, both straight-up and against the number, in recent years. However, this season just isn't it. Michigan has struggled on a routine basis, beating the teams they're supposed to beat, but losing to the good teams. It needs a signature win, but it's not happening in this game. Purdue is going to win, and it is going to cover, snapping years of futility against the spread in this series.