The Rutgers Scarlet Knights are coming off a 70-59 home win against 12th ranked Illinois. Rutgers shot a solid 47% from the field and dominated the glass 46-28. The Scarlet Knights have now won four straight games, all of them against ranked opponents. Bad news for Rutgers, their leading scorer Ron Harper, Jr. injured his non-shooting hand late in the game against Illinois and is questionable for Sunday’s game. The Scarlet Knights are currently fifth in the Big-10 with a conference record of 10-5.

The fifth ranked Purdue Boilermakers won their most recent game against Northwestern on the road, 70-64. It was an average offensive performance from the Boilermakers, but the defense stepped up, holding Northwestern to 35% shooting from the field and 28.6% from beyond the arc. Purdue has now won two straight and seven of their last eight. The Boilermakers sit atop the Big-10 with a 12-4 conference record.

The earlier season matchup between these teams ended with a Harper, Jr. buzzer-beater to give Rutgers the 70-68 triumph. Rutgers managed to shoot 52% from the field and 50% from three, while Purdue shot 41% from the field and just 26.9% from beyond the arc.

Seven of Rutgers nine losses have come on the road this year, while Purdue has lost just one game at home. Although Rutgers has been playing at an extremely high level right, I have to back Purdue in this one. The Boilermakers should play much better offensively at home and Harper, Jr. listed as questionable for Rutgers does not instill much confidence. Backing the Boilermakers in this matchup.

Rutgers has not been profitable this season with a 12-13 ATS record. They have seen more success as of late, posting a 5-0 ATS record in their last five games. The Scarlet Knights have also gone 6-1 ATS in their last seven games against Purdue. The total has gone over in 14 of Rutgers 25 games including eighth of their last 11 on the road.

Rutgers has played well on the defensive end and have allowed just 62 PPG over their last four games. Throughout the entire season Rutgers is allowing 64.6 PPG (53rd), 40.9 FG% (58th), 34.2 3PT% (216th), while averaging 7.5 SPG (92nd), and 4.2 BPG (78th). The difference maker in the first matchup was holding Purdue to 26.9% from three. The Boilermakers have been shooting 40% from three on the season, so expect Rutgers to put an emphasis on defending the deep ball again.

Purdue has gone .500 ATS this season with a 13-13-1 record. The Boilermakers have gone 8-1 SU in their last nine games and went 4-4-1 ATS over that same span. The total has gone over in 10 of Purdue's last 15 games, as well as going over in six of the last seven games against Rutgers. Purdue failed to cover in their first matchup against Rutgers as 13.5-point favorites. 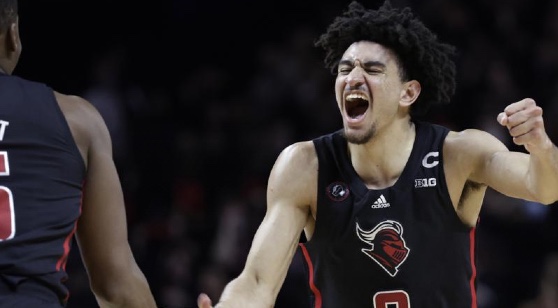 Rutgers has failed to cover the spread in seven of its last 10 road games. (AP)

INSIDE THE STATS - RUTGERS SCARLET KNIGHTS

Rutgers could very well continue their impressive streak, but I think that journey comes to an end for now. Other than their road win against Wisconsin, the Scarlet Knights have yet to prove they can hang around with big teams on the road. Purdue has been excellent all-season and will get even with Rutgers in this one. Backing the Boilermakers at home.