The 2020-21 College Football bowl season will kick off on Monday Dec. 21 when the Appalachian State Mountaineers (8-3, 6-2 Sun Belt) lock horns with the North Texas Mean Green (4-5, 3-4 C-USA) in the inaugural Myrtle Beach Bowl.

This will be the first meeting between the Sun Belt and Conference USA schools.

How to Handicap the Myrtle Beach Bowl

The Mountaineers have already played on this field once this season, and they suffered a 34-23 setback at Coastal Carolina on Nov. 21 as three-point underdogs.

It was one of the better games of the season in the Sun Belt Conference, as the Chanticleers secured the division title over the Mountaineers. At the time, App State was a little bit banged up, as their leading rusher Deatrich Harrington missed that game with an undisclosed injury, and he remains 'out' indefinitely.

Quarterback Zac Thomas was also knocked out in the game prior to the CCU game and he wasn’t at 100 percent.

App State finished on a high note, topping Georgia Southern by a 34-26 count on Dec. 12 to get back on the ball heading into bowl season. But they ended the campaign with two losses in the final four outings, and they were a dismal 1-6 ATS in the final seven, and just 2-9 ATS in their 11 games overall.

In a normal year North Texas likely wouldn’t be bowling, but 2020 is obviously anything but a normal year. The Mean Green won four games and won’t apologize for qualifying for the postseason.

They won a 45-43 thriller at UTEP in the regular-season finale on Dec. 11, never coming close to covering a 10-point number. This offense showed signs of potential during the season, scoring at least 31 points in three straight to open the season, and six times in nine games overall, including the final two.

The Mountaineers were one of the better running teams in the nation, posting 243.6 yards per game on the ground to rank 10th.

As mentioned, Harrington will be unavailable for Monday’s game, but running back Camerun Peoples picked up the slack for him and ended up leading this team in rushing by season’s end, amassing 807 yards and seven scores in his 11 games.

Nate Noel also stepped up to the plate and finished strong, going for 484 yards and three touchdowns, as the Yosef boys have a lot of depth in the backfield.

As far as Thomas is concerned, he appears to be back to health after getting knocked out of the Georgia State game. In fact, he wasn’t just knocked out of the game, he was taken to the hospital by ambulance before eventually rejoining the team.

He is a tough kid, too, as he shook off his injuries and played the very next week. He completed 64.7 percent of his passes for 2,075 yards, 19 touchdowns and 11 picks while running for 278 yards and a pair of scores.

Williams is dealing with an undisclosed injury and is a question mark. 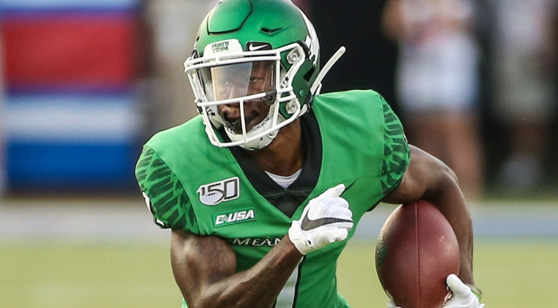 North Texas has been a great 'over' bet this season and those numbers have been helped by big-play receiver Jaelon Darden. (AP)

The Mean Green saw QB Damon Fine move on after last season, but Austin Aune stepped right in and did a good job filling some huge shoes.

The UNT offense didn’t skip a beat, going for 515.0 total yards per game to rank seventh in the country.

The run game was a bigger part of the equation, though, going for 230.2 yards per game on the ground to check in 13th in the land.

Aune passed for 1,650 yards and 13 touchdowns across eight games, while RB DeAndre Torrey led the way on the ground with 656 yards and six scores while posting yards per game each time he touched it.

WR Jaelon Darden is the speed burner on the outside, leading the team with 1,190 yards on 74 receptions and an eye-popping 19 touchdowns in just nine games.

That’s not a typo. In fact, the Mean Green had 25 receiving touchdowns, and Darden accounted for 76 percent of the scores through the air.

They coughed up 509.4 total yards per game, 243.6 rushing yards per game and 41.3 PPG, which has to have the App State skill position players eager to get a piece of them in this matchup.

This is the first-ever meeting on the gridiron between these schools.

This will be the first-ever battle in football between App State and North Texas, so let’s look at bowl history instead.

App State has won all five of its bowl appearances since moving up to the FBS level 17 years ago.

Meanwhile, UNT is just 2-7 in bowl games, with its last taste of victory in the postseason coming in the 2013 Heart of Dallas Bowl.

-- App State is just 1-5 ATS in the past six as a favorite, and 0-4 ATS in the previous four non-conference games.

-- They’re also 0-4 ATS in their past four outings against Conference USA opponents.

-- North Texas enters just 1-7 ATS in the previous eight as an underdog, while cashing in just one of the past five bowl games as a ‘dog.

-- They’re also a dismal 6-21 ATS in the past 27 games overall across the past three seasons.