In a lot of ways, this has been the year of the mid-major in college football.

Teams like Cincinnati, Coastal Carolina, BYU, and Liberty have received a ton of national attention throughout the season.

However, the Louisiana Ragin’ Cajuns have slipped under the radar despite opening the season with an upset win over Iowa State in Ames.

The Ragin’ Cajuns will take on the UTSA Roadrunners in the First Responder Bowl the day after Christmas, and they are two-touchdown favorites.

How to Handicap Louisiana vs. UTSA

Despite receiving interest from Auburn and other schools, Billy Napier seems likely to stay in Lafayette for one more season.

Napier has quickly made Louisiana one of the best Group of Five programs in the nation. The Ragin’ Cajuns have won the Sun Belt West for the last three seasons under his watch, and they are 20-4 overall and 15-2 in Sun Belt play over the last two years.

Louisiana upset Iowa State 31-14 in Ames back in September. That led to the Ragin’ Cajuns being favored in seven of their next eight games by nine points or more, and they struggled to meet the oddsmakers’ expectations.

Louisiana failed to cover the number in five straight games as a nine-point favorite or more before hammering South Alabama and rival Louisiana-Monroe. The Ragin’ Cajuns closed out the regular season with a 24-21 win over Appalachian State as a short underdog.

Traylor led the Roadrunners to seven wins for the first time since 2013. The Roadrunners were one of the toughest tests of the season for BYU, and they ended the season with three straight wins to ensure a winning record.

The Roadrunners were never favored by more than nine points against an FBS opponent. Four of their six FBS wins were by three points or less, but they closed out the season with a bang. UTSA hammered UTEP and North Texas by 30+ points in two of its last three games.

Louisiana boasts one of the most efficient run games in the nation. The ground game is averaging 5.4 YPC and 208.2 YPG thanks in large part to First Team All-Sun Belt RB Elijah Mitchell.

Mitchell has split carries with Trey Ragas this season, and the duo have been a fantastic one-two punch. Mitchell has run for 751 yards (6.2 YPC) and seven TDs, while Ragas has run for 660 yards (5.6 YPC) and nine TDs. Both players have run for at least 75 yards in four of the last five games.

Levi Lewis has had a nice season under center for the Ragin’ Cajuns. He won’t play at the next level since he is only 5’10 and 184 pounds, but he is a playmaker in college.

Lewis is completing 60 percent of his passes for 2,128 yards (7.7 YPA) with 17 touchdowns and seven interceptions this year. He is a superb runner too, averaging 8.8 YPC once you exclude sack yardage.

The Ragin’ Cajuns don’t throw the ball too much. When they do turn to the air, Jalen Williams, Peter LeBlanc, or Kyren Lacy are likely to be the targets. These are the only three players on Louisiana with more than 200 receiving yards, and they are responsible for roughly half of the team’s aerial gains.

Few teams defend the pass better than Louisiana. The Ragin’ Cajuns are allowing 5.5 YPA (third nationally) and 166.9 YPG (fifth nationally) through the air.

Bralen Trahan is one of the best ballhawking safeties in the nation with nine pass defenses and four interceptions, while Mekhi Garner can play on an island with seven pass defense and three picks.

Chris Smith is one of the most dangerous returners in college football. He was named First Team All-American as a returner by two different publications, amassing over 1,000 all-purpose yards in 2020.

Sincere McCormick was named Conference USA Offensive Player of the Year earlier this week. He ran for a school-record 1,345 yards, averaging 6.0 YPC with 11 touchdowns in 2020. McCormick finished the regular season with a 251-yard performance and two touchdowns against North Texas, surpassing 130 yards for the sixth time this season.

UTSA might have something special in Lowell Narcisse, but the quarterback could only play two games this year before suffering a season-ending injury.

In his absence, Frank Harris hasn’t been bad. Harris is completing 63.8 percent of his passes for 1,422 yards (6.2 YPA) with 10 touchdowns and five interceptions. He is a dynamite runner too.

Harris is the second-leading rusher on the team behind McCormick with 437 yards and eight touchdowns, and he is averaging 8.1 YPC after sack yardage is taken out.

Hunter Duplessis is one of the most reliable kickers in the nation. He went 37-38 on extra points and 16-18 on field goals this season. Duplessis’ only self-inflicted miss was from 52 yards out, while his other missed field goal attempt was blocked.

The Roadrunners are respectable on defense. They rank in the 40s, 50s, and 60s in almost every major defensive category, but there isn’t a particular area where they excel.

Safety Rashad Wisdom has been their leader all season, but he might not be able to play in this game due to an arm injury. Wisdom was a First Team All-CUSA selection who led UTSA in tackles and interceptions, so his absence would be noticeable.

Traylor won’t be able to coach this game after testing positive for COVID-19 on Wednesday, so offensive coordinator Barry Lunney Jr. will call the shots in his place. 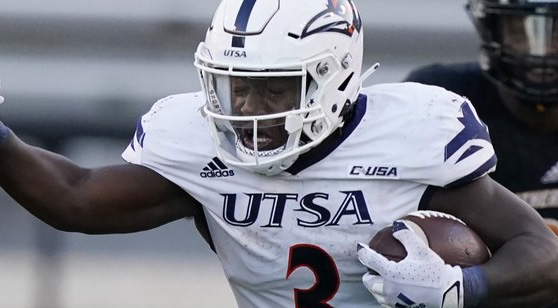 RB Sincere McCormick and the Roadrunners have produced solid profits as underdogs this season. (AP)

This will be the first meeting between these two teams. UTSA only started its football program in 2011, so the Roadrunners have yet to play most teams in the FBS.

-- Louisiana has covered three straight games ahead of this bowl game

-- Also no covers last two years in bowls for Napier