Florida will be missing a bunch of offensive firepower in Wednesday’s Cotton Bowl showdown vs. Oklahoma at Jerry World in Arlington, Texas.

How to Handicap Florida vs. Oklahoma

Florida star tight end Kyle Pitts opted out on Dec. 20, one day after he produced another spectacular performance in his team’s 52-46 loss to Alabama in the SEC Championship Game. On Monday, senior WRs Kadarius Toney and Trevon Grimes joined Pitts in skipping the Cotton Bowl to stay healthy and start preparing for the 2021 NFL Draft.

About an hour later, sophomore WR Jacob Copeland announced that he had tested positive for COVID-19 multiple times and will miss the game vs. OU. Copeland had 23 catches for 435 yards and three TDs this season.

Pitts finished 10th in the Heisman Trophy voting, becoming the first TE to finish in the top 10 since 1977. He caught 43 balls for 770 yards and 12 TDs even though he missed three games.

Toney paces the Gators in receptions (70), receiving yards (984), and all-purpose yards (1,439). He has 10 TD catches, a punt return for a score and one rushing TD. Grimes has hauled in 38 catches for 489 yards and nine TDs, including a leaping grab over first-team All-American cornerback Patrick Surtain Jr. in Atlanta.

UF is also going to be without senior CB Marco Wilson and senior safety Shawn Davis. Wilson’s departure comes after two nightmare performances. Wilson, who started at UF from the season opener of his true freshman season, had a solid career and is an NFL prospect.

However, his penalty for throwing the LSU player’s shoe will live in infamy, playing a critical role in a 37-34 loss to the Tigers as a 23-point home favorite. Then Wilson missed seven tackles and gave up eight receptions for two TDs on eight balls targeted his way in the loss to top-ranked Alabama.

Davis will miss a fourth consecutive game injured. He had 40 tackles, two tackles for loss, two interceptions, one forced fumble and one pass broken up in seven games.

Nevertheless, it would be ignorant to dismiss this Florida offense as being incapable of executing against the Sooners.

Oklahoma will be without its best cornerback in Tre Brown, who has opted out after making the game-sealing play (and two big plays on special teams) in a revenge win over Iowa State less than two weeks ago. Brown had 31 tackles, six PBU, three interceptions and one TFL on the season.

OU will also be without sophomore TE Austin Stogner, who remains ‘out’ with a leg injury. In seven games, Stogner had 25 receptions for 410 yards and three TDs. 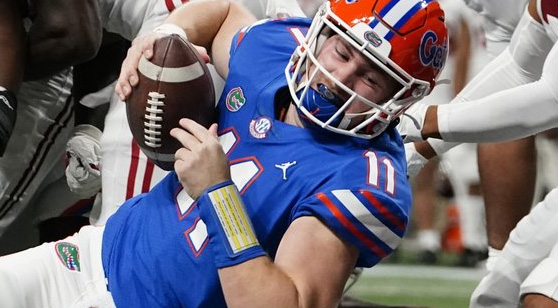 The Florida Gators will need a big game from QB Kyle Trask, who won't have a full arsenal of weapons available. (AP)

Trask has completed 69.7 percent of his passes and leads the nation in both passing yards (4,125) and TD passes (43). He has three rushing TDs and has been intercepted only five times.

Trask still has WR Justin Shorter, a former five-star recruit who transferred to UF from Penn State. Shorter has 23 catches for 246 yards and three TDs. A pair of freshman wideouts, Trent Whittemore and Xzavier Henderson, will take on larger roles.

Henderson has eight catches for 136 yards and one TD, while Whittemore has eight receptions for 81 yards and one TD. Senior WR Rick Wells will get increased playing time as well. Wells has caught six balls for 77 yards this year.

Trask likes throwing to all three RBs as well. Malik Davis has 29 receptions for 358 yards, while Nay’Quan Wright has 17 catches for 206 yards. Dameon Pierce has 15 grabs for 136 yards and one TD.

The tight end cupboard isn’t bare just because Pitts won’t be in uniform. Sophomore TE Keon Zipperer had a pair of TD receptions in a 63-35 home win over Arkansas when Pitts was sidelined with a concussion back in November. In the next game at Vanderbilt, junior TE Kemore Gamble had two TD catches in a 38-17 win.

Third-year sophomore QB Emory Jones always gets a little bit of playing time on a weekly basis. In an effort to spark the running game and also attempt to keep Trask healthy before cashing in on a great season by going high in the 2021 NFL Draft, I won’t be surprised if Jones gets more snaps than usual.

For starters, he’s been ready to take this offense over and perform effectively for quite some time now. I’m of the belief that Jones is poised for a monster, albeit much different when compared to Trask’s sensational 2020 campaign, season in 2021. Jones only took two snaps in the gut-wrenching loss to Nick Saban’s juggernaut program, but both were running plays for him that netted 24 rushing yards and a pair of first downs.

Although Oklahoma’s stop unit is ranked third in the country in run defense, it is ranked No. 75 nationally at defending the pass. Perhaps this will change vs. OU due to the absence of multiple playmaking WRs, but UF rarely runs the ball unless Jones is under center. Therefore, one would think that head coach Dan Mullen’s offensive plan will remain one that’s heavily focused on chunking the ball around the yard.

Florida leads the nation in passing yards per game (388.4 YPG), is ninth in total offense and 11th in scoring with its 41.6 points-per-game average. On the flip side, this is perhaps the Gators’ worst defense in the past four decades.

Lincoln Riley’s squad won the Big 12 Championship Game for the fifth straight season and the eighth time in the last nine years on Dec. 19, when the Sooners beat Iowa State 27-21 as five-point favorites.

They saw a 17-0 first-half lead slashed to 24-21 with 5:15 remaining, only to answer with a 32-yard field goal with 2:01 left. The Cyclones, who were gunning for their first conference title since 1912, saw their last-gasp comeback bid thwarted when Brown intercepted Brock Purdy with 1:05 remaining at the OU 6.

Brown had other big plays against Iowa State, returning two kickoffs for 86 yards to set up shorter fields for the OU offense.

Brown’s penchant for big plays has been a theme during his OU career, especially in the Big 12 Championship Game. In 2018, he tackled Texas QB Sam Ehlinger for a safety in a 39-27 win. Then last year vs. Baylor, he had a TD-saving tackle that helped force overtime in a 30-23 triumph.

Since losing back-to-back games at home vs. Kansas State (38-35) and at Iowa State (37-30), Oklahoma has ripped off seven consecutive wins while going 6-1 ATS.

Five of the seven victories have come by margins of 13 points or more.

The first win off the loss in Ames was the most impressive, as Riley’s bunch outlasted Texas 53-45 in triple overtime. Other notable scalps since then include a 33-14 win at TCU and a 41-13 home win over Oklahoma State.

Redshirt freshman QB Spencer Rattler has a 15/3 TD-INT ratio during OU’s seven-game winning streak. For the season, he has connected on 68.0 percent of his throws for 2,784 yards with a 25/7 TD-INT ratio. Rattler also has 120 rushing yards and five TDs.

His favorite target is true freshman Marvin Mims, who has 36 receptions for 583 yards and eight TDs. Sophomore WR Theo Wease has 36 catches for 494 yards and three TDs, while junior Charleston Rambo has caught 23 balls for 267 yards and two TDs in eight games.

Senior RB Rhamondre Stevenson has 479 rushing yards and six TDs, averaging 5.8 YPC. He also has 18 receptions for 211 yards. Stevenson has put up those numbers despite missing OU’s first five games.

This is a rematch of the 2008-2009 BCS Championship Game at the Orange Bowl in Miami.

Percy Harvin produced 171 yards on 14 touches to lead the Gators to a 24-14 win as five-point favorites.

-- In nine games as an underdog during Mullen’s three-year tenure, Florida has compiled a 6-1-2 spread record with five outright victories. UF has been an underdog twice this year, spanking Georgia 44-28 as a three-point ‘dog and losing to Alabama by six as a 16-point puppy.

-- OU has cashed tickets at a 4-1 ATS clip in five games as a single-digit favorite this season.

-- Totals have been an overall wash (5-5) for the Sooners, who have seen the ‘under’ cash in three consecutive contests that have had combined scores of 48, 41 and 54 points.

-- OU’s games have averaged combined scores of 63.7 PPG. Four of the Sooners’ 10 games have had 71 combined points or more.

-- The ‘over’ has hit in back-to-back games for the Gators to improve to 7-4 overall.

-- This is UF’s second-highest total of the season. The 98 combined points in the six-point loss to Alabama went ‘over’ the 74-point tally.

-- UF’s games have averaged combined scores of 70.2 PPG. Six of the Gators’ 11 games have had 71 combined points or more.

-- Florida has won each of its last three bowl trips, going 2-1 ATS with two of the victories coming by double digits.

-- Oklahoma went to the College Football Playoff in each of Riley’s first three seasons, losing to SEC schools in each instance.