As of late afternoon on New Year’s Eve, most betting shops had Clemson installed as a 7.5-point favorite vs. Ohio State in the Allstate Sugar Bowl at Mercedes-Benz Superdome in New Orleans. The total was 66.5 points at most spots, while the Buckeyes were +250 on the money line.

How to Handicap Ohio State vs. Clemson

When Clemson took its lone defeat this season at Notre Dame by a 47-40 score in double overtime, it was without three-year starting quarterback Trevor Lawrence, who was out after testing positive for COVID-19. Perhaps more importantly on that night in South Bend, several defensive starters like senior LB James Skalski, who had 105 tackles, 10 QB hurries, 4.5 sacks, four passes broken up and three tackles for loss in 2019, were out with injuries.

Tyler Davis, a sophomore defensive tackle who garnered first-team All-ACC honors as a true freshman in 2019, was also out at Notre Dame. Like Skalski, Davis has been back for the last three games. He had two tackles for loss in the rematch, a 34-10 win for Clemson over the Fighting Irish on Dec. 19 at the ACC Championship Game in Charlotte. Skalski contributed five tackles, one sack and one QB hurry in the spread cover vs. Notre Dame as an 11-point ‘chalk.’

With Lawrence, Skalski and Davis back in the mix, I think we’ve seen the real Clemson in its three-game winning streak both SU and ATS since the loss in South Bend. Dabo Swinney’s club has won vs. Pittsburgh (52-17), at Virginia Tech (45-10) and vs. Notre Dame. The Tigers covered the spread by 37 combined points in those three wins.

Clemson’s resume includes quality wins at Wake Forest (37-13), vs. Virginia (41-23), vs. Miami (42-17) and the three most recent wins. Considering that Lawrence was also out vs. Boston College, I still consider that a quality scalp even though the Eagles took the money easily as 26-point road underdogs.

The Buckeyes failed to cover the spread in their two games against quality foes. They beat Indiana 42-35 as 21-point home favorites, holding off the Hoosiers with a couple of defensive stands late in the fourth quarter. Shaun Wade’s pick-six in the second half of IU quarterback Michael Penix ended up being crucial.

In the Big Ten Championship Game at Lucas Oil Stadium in Indianapolis on Dec. 19, Ohio State took a 3-0 lead midway through the opening stanza. Northwestern countered with a go-ahead TD with 4:02 remaining in the first quarter, and the Wildcats held the lead until senior RB Trey Sermon scored on a nine-yard TD run with 2:41 left in the third quarter.

After a field goal extended the Buckeyes’ lead to 16-10, Sermon closed the deal with a three-yard TD run with 4:03 remaining. Ohio State won by a 22-10 count, but it failed to cover as a 16.5-point favorite. The line dropped from -21 to -16.5 late Friday and early Saturday morning. The 32 combined points went ‘under’ the 57 points for an easy winner.

Sermon had a career day with 331 rushing yards and two TDs on 29 carries. However, star QB Justin Fields was ineffective, throwing a pair of interceptions while completing just 12-of-27 passes for 114 yards.

For the season, Fields has completed 72.6 percent of his passes for 1,521 yards with a 15/5 TD-INT ratio. He has 274 rushing yards, five TDs and a 4.1 YPC average. Fields’s favorite target is sophomore WR Garrett Wilson, who has 38 receptions for 621 yards and five TDs. Junior WR Chris Olave has 36 catches for 528 yards and five TDs.

Ohio State has been an underdog just once since Day took over for Urban Meyer to start the 2019 campaign. That was in last year’s CFP semifinals loss to Clemson that we’ll hit on in detail below. 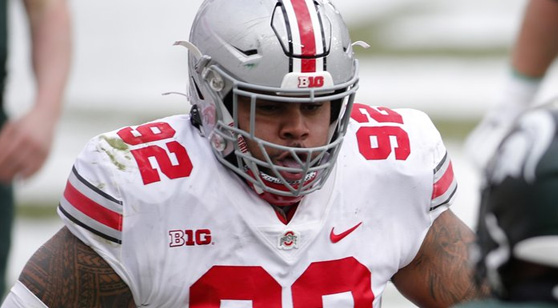 Ohio State will be listed as an underdog for the first time this season when it meets Clemson in the Sugar Bowl on Friday. (AP)

Clemson is ranked 11th nationally in total offense, seventh in passing yards, No. 65 in rushing yards and fourth in scoring with its 44.9 points-per-game average. The Tigers are ranked sixth in the country in total defense, No. 27 at defending the pass, ninth in run defense and 11th in scoring ‘D’ (17.5 PPG).

In nine games, Lawrence has connected on 69.2 percent of his throws for 2,753 yards with a 22/4 touchdown-to-interception ratio. The future No. 1 pick in the 2021 NFL Draft can make plays with his legs, too. Lawrence has produced 211 rushing yards and seven TDs.

With Justyn Ross sidelined for the season with a medical issue, senior WR Amari Rodgers has been Lawrence’s go-to guy. Rodgers has 69 receptions for 966 yards and seven TDs. Senior WR Cornell Powell has more than doubled his three-year numbers in 2020, catching 45 balls for 743 yards and five TDs.

Senior RB Travis Etienne has 44 catches for 524 yards and two TDs. The All-American RB has 882 rushing yards, 13 TDs and a 5.6 yards-per-carry average.

These schools are meeting in the CFP semifinals for the third time. In last year’s Fiesta Bowl in Glendale, Arizona, Ohio State raced out to a 16-0 lead and forced a Clemson punt more than midway through the second quarter. However, a 15-yard penalty on the Buckeyes on the punt play gave the Tigers new life.

They took full advantage and turned that possession into points with an eight-yard TD run from Etienne with 2:45 left until halftime. After getting a stop, Lawrence showed off his wheels with a 67-yard TD scamper to cut the Buckeyes’ lead to 16-14 with 1:10 left before intermission.

After Lawrence found Tee Higgins in the end zone for a successful two-point conversion that gave the Tigers a 29-23 lead, Ohio State moved deep into Clemson territory in the final minute. But Nolan Turner intercepted Fields in the red zone to close the show. Swinney’s team took the cash as a 2.5-point favorite, while the 52 combined points dropped ‘under’ the 62-point total.

Fields threw for 320 yards and one TD, but he was intercepted twice. He was held to 13 rushing yards on 14 attempts.

VI Expert Matt Blunt has once again put on his mining helmet and dug up some great analytical numbers for this year’s Final Four.

In Part 1, he provides Positives and Negatives for the below categories:

After a complete data mine of the eight categories, his Final Tally crunches the positives and negatives for all four schools and offers up his future wager pick.