The best bet in this game is the under. Both defenses are elite, while neither offense is very sophisticated. As for the side, South Dakota State is the right pick as Sam Houston State has looked vulnerable in all three of its postseason wins. 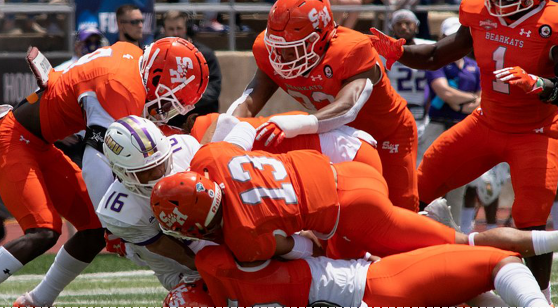 Sam Houston State came back against the James Madison Monarchs in the semifinals, trailing 24-3 at halftime only to win 38-35. (AP)

We will see a first-time champion in the FCS on Sunday. South Dakota State and Sam Houston State are each vying for their first national championship. The Jackrabbits have never been on this stage before as their previous best finish was a loss to North Dakota State in the semifinals, while the Bearkats were upended by the Bison at the end of the 2011 and 2012 seasons.

South Dakota State was the No. 1 overall seed entering the postseason. The Jackrabbits lost to North Dakota away from home in the regular season, but they went on the road to beat Northern Iowa, Southern Illinois, and North Dakota State.

They hammered Holy Cross in the Round of 16, but they needed to overcome a big deficit to get past Southern Illinois in the quarterfinals. The Jackrabbits left no doubt they were the better team against Delaware last week though, hammering the Blue Hens 31-3 Sam Houston State went unbeaten in the Southland Conference during the regular season.

The Bearkats hammered conference power Nicholls 71-17 in their most impressive performance, and they also knocked off McNeese State and Southeastern Louisiana. They held off Monmouth late in the Round of 16 before their defense shut down North Dakota State in the quarterfinals. However, the Bearkats needed to overcome a 24-3 halftime deficit to beat James Madison last weekend.

Mark Gronowski isn’t the most accurate quarterback, but he has been effective under center for the Jackrabbits. The true freshman is completing just 57.5% of his passes this season.

However, Gronowski hasn’t thrown an interception in the playoffs and has been able to move the chains with his legs. He has run for 567 yards (7.0 YPC) and seven touchdowns this season.

When Gronowski throws, it’s likely that twin brothers Jaxon Janke and Jadon Janke will be the target. Jaxon Janke leads South Dakota State in every major receiving category. He has 29 receptions for 438 yards and six touchdowns. However, Jadon Janke is more of a big play threat with 21.7 YPR.

Pierre Strong Jr. and Isaiah Davis are the one-two punch in the backfield. Strong leads SDSU with 650 yards (5.6 YPC) and three scores, while Davis has run for 640 yards (7.8 YPC) and seven touchdowns.

Gronowski is probably going to have to take to the air a little more than usual on Sunday. Sam Houston State boasts one of the best run defenses in the country. Opponents are averaging 2.2 YPC against this front seven as Joseph Wallace, Jevon Leon, and Quentin Brown were all named to the all-conference team.

However, the Dukes did have success running on the Bearkats last week, so the Jackrabbits might have some success. Eric Schmid has had an up and down season under center for Sam Houston State. While he threw for over 300 yards against five of the Bearkats’ six conference opponents, he has also thrown multiple interceptions four times in nine games.

Schmid was not sharp against either Monmouth or James Madison in the playoffs, and he isn’t that much of a running threat.

The Bearkats’ most electrifying player has been Southland Conference Newcomer of the Year Jequez Ezzard. He arrived as a graduate transfer from Howard, and he has been the biggest threat on this offense. Ezzard has 28 receptions for 753 yards and seven touchdowns this season, averaging 26.9 YPR. Ife Adeyi is also averaging over 20.0 YPR in this offense too.

Ramon Jefferson has been the No. 1 running back all year. Jefferson has run for 656 yards (6.0 YPC) and seven touchdowns this season. He hasn’t been too effective over the last two weeks though, averaging 2.0 YPC against North Dakota State and 4.0 YPC against James Madison.

South Dakota State might have the best defense in the nation. The Jackrabbits are surrendering just 4.3 yards per play despite playing in the toughest conference by a mile, and opposing quarterbacks are averaging 5.9 YPA against this secondary.