UCLA kicks off its 2021 football campaign looking for huge improvement under head coach Chip Kelly. They have managed just 10 victories in Kelly's first 31 games at the helm for the Bruins. UCLA made strikes last season, however, in a strange, COVID-shortened campaign. While they were just 3-4 SU/4-3 ATS in the seven-game season of 2020, all four of the losses were one-score games. In fact, their final outing Dec. 19 against Stanford was a thrilling 48-47 overtime loss which could have gone either way, and they fell 43-38 to crosstown rival USC on Dec. 12.

The UCLA offense racked up 25 or more points in every game, including 34 or more points in five of those games. This will be their first non-conference game since Sept. 14, 2019, a 48-14 setback against Oklahoma. They were 0-3 SU/ATS in the three non-conference games in 2019, and their last win outside of the league came Sept. 9, 2017 in a 56-23 win over these same Hawaii Rainbow Warriors. They're 0-8 SU/1-7 ATS in non-league outings since that victory.

Experience will be the difference in this one, as QB Dorian Thompson-Robinson is back under center. He was able to register 285.2 total yards per game in 2020. While the Bruins must replace RB Demetric Felton, they have RBs Brittain Brown and Michigan transfer Zach Charbonnet waiting to fill the void. That's going to be quite a dynamic duo for Kelly. Watch redshirt freshman WR Matt Sykes and incoming transfer WR Kam Brown, as they could make an instant splash, too.

The Warriors kick off their second campaign under head coach Todd Graham, who got away from the run-and-shoot approach from the previous regime. He tried to run the ball more, and they were able to post five wins in nine tries, including a bowl win over Houston. 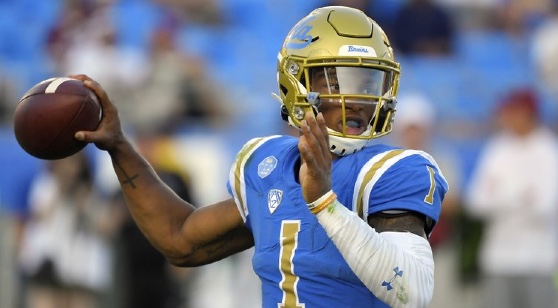 The UCLA Bruins are -18-point favorites against Hawaii, failing to cover the spread in five straight season opening games. (AP)

Hawaii went 1-2 SU/ATS in three trips to the mainland during the regular season, and they were bludgeoned the last time they faced the Bruins. QB Chevan Cordeiro is a very good quarterback, however, and he will be operating behind a fairly experienced offensive line. WR Jared Smart is also a playmaker, so Hawaii could make some noise early in this one. However, they do not have the defense to stay with the Bruins for 60 minutes, and facing a dual-threat like DTR will be quite the test. LB Darius Muasau is one of the better defenders in the Mountain West, and he'll be tasked with shadowing the quarterback.

The Rainbow Warriors also allowed a dismal 211.7 yards per game on the ground in 2020. That is not good news against good tailbacks like Brown and Charbonnet. Those two are going to enjoy running downhill in the second half, and that is going to be the difference as the afternoon rolls along. Hawaii has the pass attack to hang with UCLA for a while, but the defense is going to have a difficult time getting off the field.

If you're a first-half bettor, taking Hawaii to cover through 30 minutes is going to be a strong play. But taking UCLA for the game is the way to go. The Bruins haven't had a non-conference win in years, but Hawaii is going to be the elixir to cure their ills. UCLA will finally get off to a quick start, and they'll look to use this game as a springboard going forward. If they don't start well, Kelly's seat could get awfully hot, awfully quick.