Both Temple and Rutgers are coming off disappointing seasons, but looking to turn things around in 2021. Temple finished last year's shortened season with a 1-6 record while Rutgers ended up 3-6. The good news for Temple is that there really isn't anywhere to go but up. Last season they allowed 37 points per game while only scoring 20 points per game. The biggest collective weakness between these two teams would definitely be their collective defenses. Both struggled containing teams best players, and it's hard to not see that trend continue this year. This game probably won't be a talent showcase, but we should see some relatively high scoring football.

One of the biggest things Temple will be looking for is quarterback D’Wan Mathis to provide above-average quarterback play. He transferred from Georgia and has shown some good arm strength in the past, a big improvement over last year's quarterback rotation which only ended up passing for 11 touchdowns. Rutgers on the other hand will be starting QB Noah Vedral, who transferred from the University of Nebraska and is looking forward to a fresh start with the Scarlet Knights. Neither offense is expected to blow your socks off but expect improvement from last season for both squads.

The biggest difference maker is if this Rutgers defense overpowers the Temple offensive line. While I don't necessarily think that Temple has a terrible offensive line, the Rutgers defensive front has been something they’ve worked on extensively this offseason. That will be put on display in their first game of the season. Temple should come out better than advertised, but people forget that Rutgers had an incredibly tough schedule last season which led to wins over Purdue and Michigan State. This isn't a bad team. I'll be rolling with Rutgers -14 over the Owls on Thursday night. 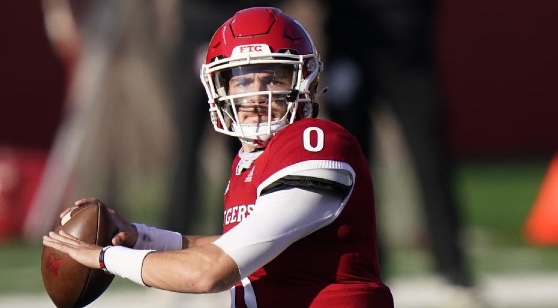 The last time these two faced was a long time ago, leading to a 23-20 win for the Scarlet Knights. Times have changed since then and it's unfair to say things haven't exactly gone up since then for the Owls. This game will be a huge blowout or an embarrassing loss for Temple, but I’m fairly confident that they just aren't quite in the same tier right now.

I considered betting the over but it's hard to get a grasp at how these teams will interact, especially with data not being quite as transferable last year due to all the situations surrounding COVID-19. I think Rutgers -14 is a great bet, along with the ML being a really good safe piece to add to any parlays you may be playing this week.