Nothing excites us more then an interstate battle. Tensions will be high and tailgates will be had! While Houston does technically have home field advantage, I'm sure neither team is too worried about that. The last couple years have been very frustrating for Texas Tech, as they haven't eclipsed the 10-win mark since 2008. Mediocracy has seemingly become expected.

Tyler Shough is really the x-factor for Texas Tech. After disappointing quarterback play has held the Red Raiders back these last couple years, many are hoping the Oregon transfer can turn things around. He led Oregon to a Pac-12 Championship and expectations are that he can help turn around this team. Houston also isn't a team to sleep on. The AAC was tough last season but with 17 returning starters, I expect this team to improve even more.

Houston is returning quarterback Clayton Tune, who threw for over 20 touchdowns last year and was definitely impressive at times. He's also getting his No. 1 weapon back in wide receiver Nathaniel Dell, along with a couple transfers including former Texas Tech receiver KeSean Carter - what are the odds of that? The Houston defense is actually pretty good and has been for years, but this offseason wasn't easy for them. Losing there top sack leader along with leading tackler to the NFL will be rough, along with having defensive lineman Chidozie Nwankwo suspended.

Overall this should be a very entertaining game. I think either team has a good chance to take it depending on a couple important factors. Can the Houston defense step up to the plate? Can a new Texas Tech quarterback bring them back to legitimate contention? Both teams should battle it out but I'm siding with Texas Tech ML at -120. I think the balanced offensive attack, bringing back there leading rusher from the last two seasons, along with their new quarterback will be enough for them to get over the finish line. 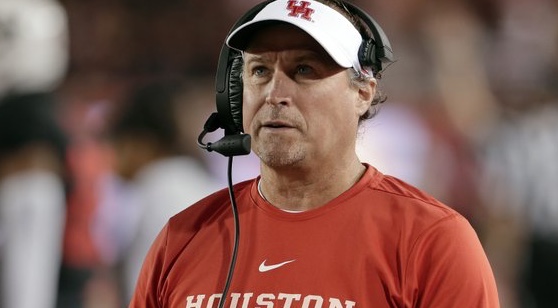 Houston has lost four of its last five games, looking to turn things around in 2021. (AP)

Bet in Tennessee
Bet in Iowa
Other Betting States

This could very well be one of those games that comes down to the last team that has the ball wins the game. I've heard convincing arguments for Houston, Texas Tech, the over and the under. This is a game you should definitely be tuning into.

I'm siding with Texas Tech for all the reasons listed prior, but this will also be an intriguing game to live bet. If I see a huge momentum swing at any point in the game then I'll definitely be eager to throw down a live bet or two. This game should be entertaining until the very end.