Boise State made the cross-country trek to the Bounce House in Orlando to face UCF last Thursday, and things were going along swimmingly. The Broncos had a 100-yard pick six just five minutes into the game by CB Tyric LeBeauf, and they ended up building a 21-0 lead early into the first quarter. Not only did it appear they were en route to a cover, but an outright win as road 'dogs. But UCF came alive with a pair of second-quarter touchdowns, including one with just six seconds left before halftime to cut the lead to 24-14. The Broncos were outscored 22-7 in the second half, as Boise State wilted under the Central Florida heat and humidity, and they forgot how to play defense, too.

It was a disappointing finish for Boise State, as they coughed up an un-Boise State-like 255 rushing yards and 318 passing yards, and they lost the turnover battle with a minus-2 differential. UCF also outpaced them 29-17 on first downs, handing Boise a rare loss, as they're usually one of the top Group of 5 contenders.

The Broncos return to the Smurf Turf with an unbeaten UTEP Miners team awaiting them. Yes, that's correct, a 2-0 UTEP team. QB Gavin Hardison tossed a career-high three touchdowns for Dana Dimel's Miners, and both RBs Ronald Awatt and Willie Eldridge went for 100 yards on the ground last week in a 38-28 win over FCS Bethune-Cookman at the Sun Bowl. It's the first time UTEP has started 2-0 since 2005, and the first time they have scored 30 or more points in consecutive wins since 2014.

While the Miners are averaging 462.5 total yards in their two victories, and they're good for 246.5 rushing yards per game, facing the likes of New Mexico State and Bethune-Cookman isn't exactly a gauntlet. But when you're UTEP, 2-0 is 2-0, and you need not apologize. It's a great start for the Miners, who have been a perennial doormat in Conference USA over the better part of the last decade.

The good times are about to come crashing down for UTEP, however. While Boise State is a great measuring stick game to find out exactly where they are, the Miners are about to find that there is still plenty of work to be done. Still, they should be able to cobble together enough offense to grab a cover on the blue turf.

UTEP heads to Idaho looking for a huge upset and a 3-0 SU start, but it's not going to happen. The defense was exposed by the Wildcats last weekend, and the offense was able to score more points. They're not going to find as many open spaces in their first road game in front of a hostile crowd in a nationally-televised game. It's a spot too big for these Miners, although they should be able to put up a fight for at least the first half.

The Broncos are just too talented, from QB Hank Bachmeier to RBs Andrew Van Buren and Cyrus Habibi-Likio to WRs Khalil Shakir, Stefan Cobbs, Octavius Evans and CT Thomas. The Miners haven't seen a set of skill position players anywhere near what Boise State will have on the field Friday night. Their hands will be full, and so will the stat sheet with Boise State touchdowns.

I think that the Miners should be able to match the Broncos for good chunk of the first half before the Broncos start pulling away. The Boise State defense looked very vulnerable last week, and they need to show vast improvement from Game 1 to Game 2. The cliche' is that is when you see the biggest improvement of the season. That may or may not be true, but Boise State should have a much better performance because they're at home, they aren't playing in the heat and humidity, and they're hosting a team which is flying high, but very young, and playing in its first road game facing adversity. It won't end well.

I love the OVER in this game, and I like UTEP for the cover, ever so slightly, and wouldn't be surprised if it happens with a backdoor cover with a meaningless score to the overall result, once the game is out of hand and the Broncos have called off the dogs. 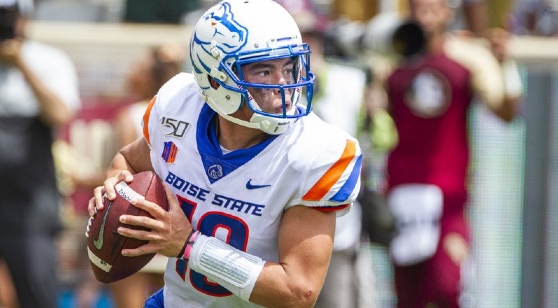