A huge Big 12 battle is set to take place Saturday night in Stillwater. The No. 21 ranked Baylor Bears will travel to Boone Pickens Stadium on for a Conference showdown against the No. 19 ranked Oklahoma State Cowboys. Both teams are undefeated entering this conference matchup, set to air on ESPN2 at 7:00 p.m. ET.

A matchup between two ranked opponents is always fun! Oklahoma State came into this season with a lot of hype, including from me in my VegasInsider season preview - living up to it with a 4-0 start. Baylor is coming into this game with a lot of momentum too, fresh off a victory against Iowa State. While that may hurt my futures portfolio, it was an impressive win in an early fairly strong resume.

Oklahoma State's strength of schedule coming in is hard to ignore. They have beaten Boise State, Tulsa, and Kansas State which isn't easy to do. They didn't look pretty in these games, but you got to give them some respect for winning ugly.

I think a lot of people aren't going to give this Baylor team the respect they deserve. Those people will point out the lack of ranked opponents to start out the year, but in reality they did what they needed to do in those games and took care of business. When they finally do take down a ranked opponent in Iowa State, I fear people will belittle that win, citing Brock Purdy’s disappointment this season rather than an impressive win from a good Baylor team.

The passing game has been efficient and they've done a good job of moving the ball on offense. QB Gerry Bohanon has been good this season with seven passing touchdowns to zero interceptions - along with four additional rushing touchdowns. He's a dual-threat quarterback that can hurt defenses in multiple different ways. The rest of the offense is very spread out, with multiple RB’s and WR’s contributing depending on the opposing teams scheme. Abram Smith could be in store for a pretty good week.

The defense has also been good, allowing only 15 points per game with just under 300 total yards per game. Their strength of schedule hasn't been the best but when you include a good Iowa State team in the mix, I think that's impressive despite how many ranked opponents they may have faced. This will definitely be a good test of the Bears defense but I think they can hold up.

Oklahoma State has been a pleasant surprise to many this season. Quarterback Spencer Sanders has been a bit up-and-down so far, but has performed well in key moments. They've had key struggles in almost all of their games, but have shown nothing but perseverance. I don't think this team is flashy enough to blow anybody's socks off, but they will be competitive every single week.

That being said, 3.5 is too many points going against a tough Baylor team with a total set at only 48. Baylor proved a lot of haters wrong last week and should have plenty of momentum riding into another game with the odds stacked against them.

While I don't think Sanders has been bad this season, he also has amazed me. This team seemingly goes back and forth between relying on the pass/run game, but doesn't seem to be in a great rhythm on either side of the offense. The versatility and ability to fight in these close games is definitely important, but I think they may end up falling just short on the cover. 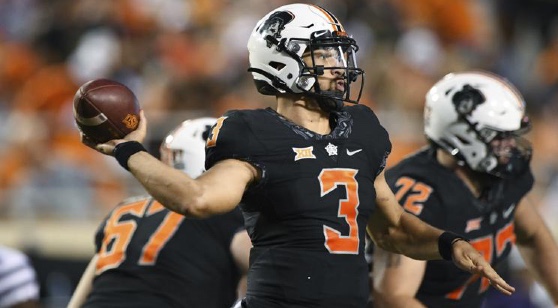 The Oklahoma State Cowboys have gone UNDER the point total in 13 of their last 19 games. (AP)

Inside the Stats - Baylor Bears

Inside the Stats - Oklahoma State Cowboys

The best bet in this game is Baylor +3.5. Unless the number gets to an even three, I think its either bet Baylor and take the dogs or just leave it alone. With player props, I like to target players with complete control of their given role on the field. Whether that be super high market share receivers or running backs. Both teams feature a lot of talented skill position players so I will most likely be avoiding the prop markets here and sticking to the spread only.