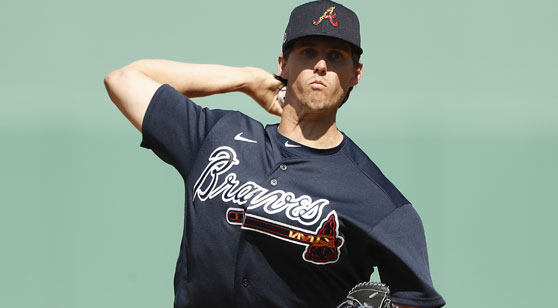 Kyle Wright heads to the mound tonight for the Braves as they face the Rays. (AP)

The 5th overall pick in the 2017 MLB Draft gets his first start of the 2020 season Tuesday night as Kyle Wright will get the ball against the Tampa Bay Rays after the Braves 14-5 loss on Monday night.

Wright started the 2019 season in the Braves rotation, but got sent back down to the minors after posting a 7.07 ERA, and allowing 4 home runs in just 14 innings pitched. He would then return to the bullpen later in the year to make 4 short appearances that went much better than his appearances as a starter.

Wright may not quite be ready to be a solid rotational piece in the bigs, but what he has shown us is that he has the ability to strikeout batters. He started the 5th inning in 2 of his starts last year, and in both of those starts he went over 3.5 strikeouts. He also was able to tally at least one strikeout in every relief appearance he made last year.

It feels like the Braves try to force this guy into the rotation every time they get the chance, so I expect them to ride him here tonight if they are given the opportunity. This will be Wright’s 3rd year in the league now, it’s about time for the first rounder to start making some progress.

Even with the Rays winning the game yesterday, they still managed to strikeout 12 times. If Wright is able to journey into the 4th or 5th inning, I like this strikeout total to go over easily.

Carlos Martinez makes his first start in almost 2 years against the Twins on Tuesday night, as the 2-time All-Star pitched in 48 games last season tallying a 3.17 ERA, and finally feels good enough again to jump back in the starting rotation.

I typically like to bet against guys who are making their first start after spending a decent amount of time in the bullpen, but luckily for Martinez tonight, he is up against 34-year old Homer Bailey, who the Cardinals hitters know very well.

Even Harrison Bader and Dexter Fowler have both taken Bailey deep. I hope Martinez looks good tonight, but I’m not going to bet on it. The Cardinals have scored over 4.5 runs in 2 of their first 3 games so far this year. Back the Cardinals to tee off against Bailey tonight.

As far as the Dodgers are concerned, Opening Day is Tuesday night at 9:10 PM against the Houston Astros. The favorites to win the NL pennant split their first 4-game series of the season with Gabe Kapler’s San Francisco Giants this past weekend, which appears to be a disappointment, but really might be a win considering Walker Buehler and Clayton Kershaw are both yet to take the mound in 2020.

That changes Tuesday night, as Buehler heads to the mound for the Dodgers against Frambler Valdez and the Houston Astros in a 2017 World Series rematch. Buehler has had an outstanding start to his career, posting an 8-5 record in his rookie season along with a 2.62 ERA, landing him 3rd in the ROY voting. Then following that up with a 14-4 season, with a 3.26 ERA, landing him 9th in the NL Cy Young voting.

Buehler truly is the ace of this Dodger team, and that takes a lot pitching alongside Kershaw. Valdez who is a left-hander that bounces around between the Astros bullpen and starting rotation based off need. Valdez posted a 2-5 record in 8 starts last season with an ERA of 5.86 for the season.

This is a lopsided pitching matchup, that should result in an early lead for the Dodgers, even if the Astros are able to get to Buehler a little bit. Don’t worry about the Dodgers poor numbers against lefties in this one. Back the Dodgers to lead for the majority of this game and to be leading the Astros at the end of the 5th inning.