The Phillies went for a long stretch of not being able to win back-to-back games, which actually reached a 10-game skid this season off a victory.

However, the Phillies have turned it around of late with three straight one-run victories over the Brewers, as Zack Wheeler tries to turn around some recent bad luck here and get Philadelphia the day-time sweep against a tough starter in Milwaukee's Brandon Woodruff. 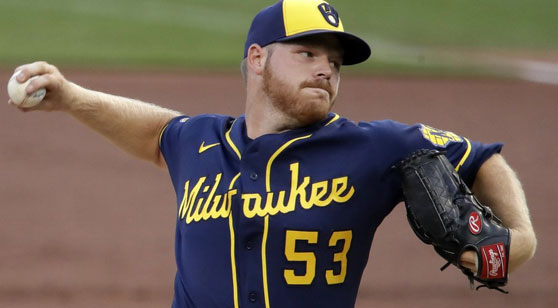 Brandon Woodruff takes the mound on Thursday as the Brewers try to avoid the sweep at Philadelphia. (AP)

The Brewers have lost four straight games, but still sit one game out of first place in the National League Central behind the Cardinals at 17-14.

The Phillies have surged into first place of the National League East with three straight wins to move to 16-15 on the season, while owning a 12-6 mark at Citizens Bank Park.

The Phillies have captured all three meetings with the Brewers in this series as Philadelphia seeks a four-game sweep this afternoon.

All three wins have come by one run apiece, starting with the Phillies edging the Brewers in Monday's series opener, 4-3.

Phillies' outfielder Andrew McCutchen knocked out a pair of home runs in Tuesday's 6-5 triumph as Philadelphia built a 6-1 lead before Milwaukee had an opportunity to tie the game in the ninth inning and failed.

The Phillies struck for five runs in the first inning of Wednesday's 5-4 triumph as the Brewers rallied again, but fell into too deep of a hole and suffered their fourth straight loss since a three-game winning streak.

The Brewers' right-hander continues to be a workhorse as he has tossed at least six innings in five straight outings. Milwaukee owns a 5-1 record in Woodruff's six starts this season, including a perfect 3-0 road mark.

Woodruff has seen the Under cash in four of six outings, while the Under is 15-4-1 in his previous 20 starts since the beginning of the 2020 campaign.

Since dominating the Braves in his season debut, Wheeler has allowed less than three earned runs only once in the last five trips to the mound.

Philadelphia is 1-4 in Wheeler's past five outings, in spite of the right-hander striking out at least six batters in four straight appearances.