Both these teams have their eyes on October baseball as Tampa Bay and Oakland split a tough four-game set two weeks ago at Tropicana Field.

All four games were low-scoring affairs in St. Petersburg, but the Rays have swung the bat well on their road trip so far and have picked up their offense on the highway.

Look for runs to be scored tonight in Oakland between the Rays and Athletics. 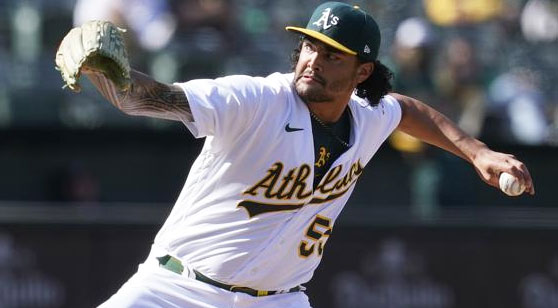 Sean Manaea takes the mound on Friday night as the Athletics welcome the Rays to Oakland. (AP)

The Rays own an 18-15 record and sit 1.5 games behind the Boston Red Sox for first place in the American League East.

Oakland dropped the final two contests of a four-game set to Toronto, but the Athletics still lead the American League West division with a 19-14 mark.

The A's and Rays split a four-game series at Tropicana Field in late April as all four games finished 'under' the total.

Three of those contests were decided by one run each, as the most runs scored by any team in the series was four by Tampa Bay in a 4-3 triumph on April 27.

The Rays have alternated wins and losses in Hill's six starts this season, coming off a 5-4 comeback win in his last outing against Houston.

Hill tossed three scoreless innings in his shortest start of the season, but it was his most productive appearance.

Since allowing five earned runs in a 9-2 loss to the Astros in early April, Manaea is unbeaten in his last five starts.

The southpaw limited the Rays to two hits and one earned run in five innings of a 2-1 victory on April 26.