The Braves have struggled with the Blue Jays this season by losing each of the last four meetings, including Tuesday's 5-3 setback.

Max Fried takes the mound for Atlanta tonight, looking to beat Toronto for the second time since 2020.

The Blue Jays are 2-5 in their last seven games off a road win and this is a good spot as the Braves are a short favorite to rebound. 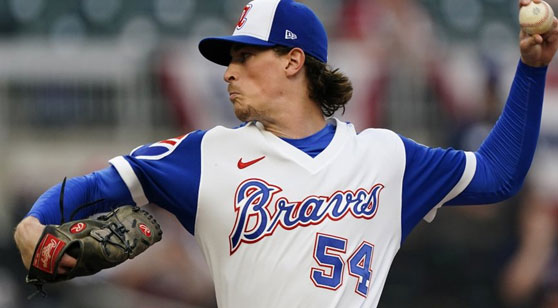 Max Fried seeks his second consecutive victory as the Braves and Blue Jays continue their series in Atlanta tonight. (AP)

The Blue Jays are right in the middle of the American League East race at 18-16 and sit 2.5 games behind Boston for first place.

The Braves are also in third place of the National League East, owning a 17-18 mark overall and 9-9 at Truist Park.

It's been all Blue Jays in four meetings against Atlanta this season as Toronto pulled off a home sweep earlier this month.

The Blue Jays have scored at least five runs in all four wins against the Braves, including a 5-3 triumph on Tuesday as Toronto scored three runs in the eighth inning to pull away for the victory.

Ryu has been shaky since a solid beginning to the season as the southpaw owns a 5.27 ERA in his last three trips to the mound.

The former Dodgers' hurler allowed four earned runs in five innings at Oakland his last time out, but the Jays provided plenty of offense in a 10-4 win, while Ryu is facing the Braves for the first time this season tonight.

Last season, Fried was the ace of the Braves' rotation with a 7-0 record and 2.25 ERA. However, the southpaw has struggled to start 2021 by already allowing at least five earned runs in two separate outings.

Fried is coming off his best start of the season in a 5-3 win at Washington by limiting the Nationals to four hits and one run in five innings of work.