Colorado has pitched well during its current homestand, allowing two runs or less in five of the first six games.

German Marquez is coming off a complete-game one-hitter against the Pirates his last time out as the Rockies' ace heads to the mound today seeking the series victory for Colorado. 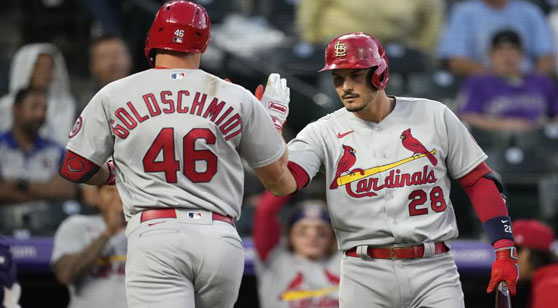 Nolan Arenado and the Cardinals look to finish off their series at Colorado with a win on Sunday. (AP)

The Cardinals sit 10 games out of first place in the National League Central at 41-43, as St. Louis is trying to avoid its first losing season since 2007.

Colorado really had no shot at winning the National League West entering the campaign, but the Rockies are 36-48 after losing All-Star third baseman Nolan Arenado to the Cardinals in the offseason.

The Rockies have soared at home this season by posting a 30-17 home record, as Colorado is one of three teams to have already won 30 games at home.

The Cardinals swept the Rockies at Busch Stadium in early May, but Colorado has taken two of three matchups during this current four-game series in Denver.

The Rockies walked-off past the Cardinals on Thursday night, 5-2 behind catcher Elias Diaz's three-run walk-off homer.

St. Louis bounced back on Friday night in extra-innings, 9-3 as the Cardinals scored six runs in the 10th inning, capped off by a grand slam from Harrison Bader.

On Saturday night, Rockies' star shortstop Trevor Story drilled a three-run homer as Colorado held off St. Louis, 3-2, marking the seventh straight 'under' for the Rockies.

Martinez had a June to forget as the right-hander allowed at least five earned runs in four separate starts, including getting tagged for 10 runs in less than one inning in a loss to the Dodgers.

However, Martinez closed out June with a victory over Arizona, 3-2 as a -155 home favorite, while yielding one earned run in six innings of work.

Martinez was knocked around by the Rockies the last time he faced them at Busch Stadium on May 8 by giving up five earned runs in five innings, but St. Louis held on for a 9-8 win.

Marquez has turned things around since a slow start as the Rockies are 7-2 in the right-hander's last nine trips to the mound.

Since losing a 2-0 decision at St. Louis on May 9, Marquez has been dynamic on the hill by allowing one earned run or less seven times, while the Rockies are 6-0 in his previous six home starts.