Following an emotional contest on Saturday night at Citi Field as the teams honored the fallen from September 11, 2001, the Mets and Yankees wrap up their season series tonight.

The Yankees held off the Mets on Saturday to remain in the mix for one of the two Wild Card spots in the American League, while both games this weekend at Citi Field have been high-scoring affairs.

Look for a lower-scoring affair this evening as the Yankees turn to a bullpen game likely, while Carlos Carrasco has pitched better since a slow start with the Mets. 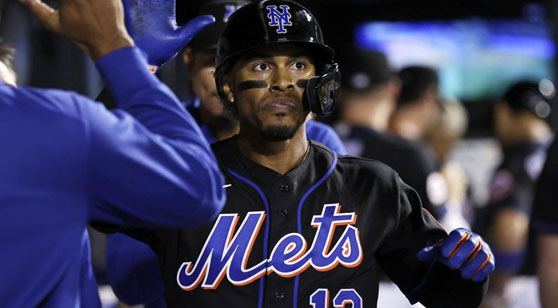 Francisco Lindor and the Mets seek the series win over the Yankees on Sunday night. (AP)

The Subway Series is split at 1-1 this weekend even though the Mets should feel like they are going for the sweep tonight at home.

The Mets ripped the Yankees, 10-3 on Friday night to move the Amazin's to 3-1 against the Bronx Bombers on the season and extend the Pinstripe's skid to seven games overall.

On Saturday, the Yankees built an early 5-0 lead before the Mets rallied back for a 7-5 advantage in the 7th inning. However, the Yankees stormed back with three runs in the 8th inning to pick up their first victory since September 3 against Baltimore.

This isn't the season Carrasco imagined after getting traded from Cleveland along with Francisco Lindor. Carrasco has pitched into the seventh inning only once in eight outings, but the Mets are 2-0 in his last two starts, both against the Marlins.