The ALDS is as the Boston Red Sox take on another divisional opponent this postseason as they take on the Tampa Bay Rays Thursday night. Game 1 is set for 8:07 p.m. ET and will air on FS1 from Tropicana Field in St. Petersburg, Florida.

The Tampa Bay Rays won 100 games for the first time in franchise history this year. Tampa Bay finished with the best record in the American League, and the Rays are hoping they can win their first World Series after falling short against the Los Angeles Dodgers last year. The Boston Red Sox have been the most successful franchise in the sport over the last two decades though, winning four World Series rings since 2004.

Boston’s bullpen is a mess coming into this series. To make matters worse, the Red Sox will be starting someone on just three days of rest in Game 1. Chris Sale, Nick Pivetta, and Eduardo Rodriguez all pitched on Sunday, and one of those three players will start for the Red Sox on Thursday.

Conversely, Tampa Bay has one of the best bullpens in baseball. The Rays’ bullpen boasts a 3.29 ERA which is tops in the American League. They have had time to rest before the postseason too, giving the Rays a big edge in the first game of the ALDS.

The Rays have won 11 of their last 15 meetings with the Red Sox. 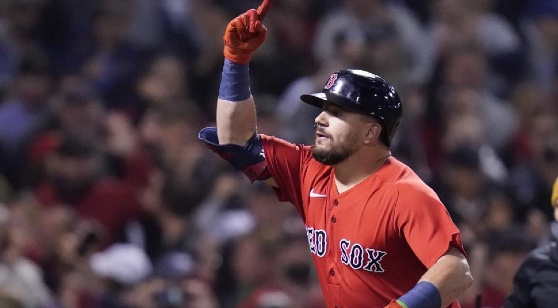 The Boston Red Sox got past the New York Yankees in the AL Wild Card with the help of Kyle Schwarber's third inning home run. (AP)

Inside the Stats - Tampa Bay Rays 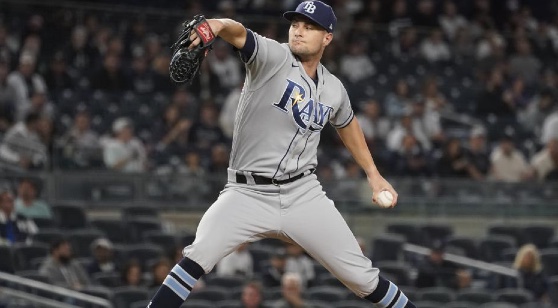 Shane McClanahan gets the start for Tampa Bay in Game 1, recording 13 strikeouts and three earned runs over his last three starts. (AP)

Unlike previous years, the Rays actually have an intimidating lineup. Tampa Bay rode its pitching staff to the pennant last season, but this team has some real bats entering the postseason this time.

Brandon Lowe led the team with 39 home runs this season. He had a dismal postseason last year, striking out 28 times in 76 at-bats and finishing with a .118 batting average, but he should fare better this time.

We saw Randy Arozarena announce himself to the world with 10 home runs last postseason. Arozarena set the record for most dingers in one postseason in 2020, but he has been in a bit of a power slump.

Mike Zunino has been boom or bust this season with 33 home runs and 132 strikeouts. Nelson Cruz has given the Rays another power hitter since being acquired from Minnesota, but the hitter to watch is Wander Franco. Franco was the top prospect in baseball entering 2020 and 2021, and his on-base streak of 43 games put him in rarified air.

Tampa Bay will send Shane McClanahan to the mound on Thursday. McClanahan has been the Rays’ best starter since Tyler Glasnow was lost for the season. McClanahan has a 1.27 WHIP and a 10.3 K/9, and he has a 2.81 ERA in 6 innings of work against Boston in 2021.

J.D. Martinez was unable to play against the New York Yankees on Tuesday night, and we don’t know whether or not he will be able to play through an ankle injury in this series. Martinez was one of Boston’s three best bats along with Rafael Devers and Xander Bogaerts, so he will be missed if he can’t play.

Devers led the Red Sox with 38 home runs and an .890 OPS in 2021. He walked twice against the Yankees on Tuesday, and he was one of the team’s heroes in Game 162 with four hits off Washington.

Bogaerts didn’t have the same pop as Devers, but he led the team in batting average and OBP. He broke open the game on Tuesday night with a 1st inning home run off Gerrit Cole, playing a major factor in Cole being chased in the third inning.

Hunter Renfroe has had a nice season at the plate for the Red Sox, and both Bobby Dalbec and Alex Verdugo have put up decent hitting numbers too.