Game 4 of the ALDS sees the Chicago White Sox host the Houston Astros after winning Game 3 and now down 1-2 in the series. Opening pitch is set for 3:37 p.m. ET and will air on FS1 from Guaranteed Rate Field in Chicago, Illinois.

The Chicago White Sox came through in a must-win situation in Game 3. Chicago’s hopes looked bleak after falling behind the Houston Astros 5-1 in the third inning, but the South Siders rallied with eight runs in their half of the third and fourth innings to pick up a 12-6 victory and force a Game 4. Their bats finally got going, and they can’t afford to let up on Monday.

The home crowd will be happy that Carlos Rodon is on the mound for Game 4. Rodon was the team’s most effective pitcher in the regular season, but he has been dealing with a sore left arm. Opponents have hit just .170 against Rodon at home this season, so the Astros’ bats will likely be kept in check for as long as Rodon can throw. 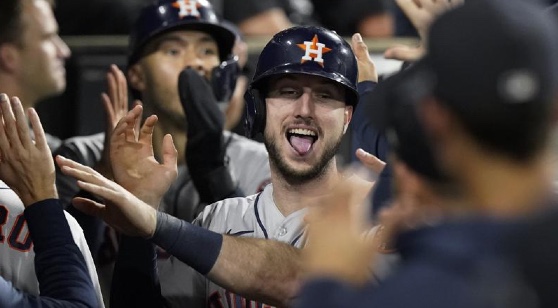 The Houston Astros have gone OVER the run total in five of their last six games. (AP)

There are legitimate concerns over just how much Rodon can pitch in the postseason. He has yet to throw more than 165 innings in his seven-year career, and he is coming off his best season as a pro. The White Sox have been sparing with him over the last two months, and he has not thrown more than five innings in a start since a seven-inning gem in a 4-0 win over Houston back on July 18.

Chicago’s lineup finally started hitting on Sunday night. Luis Robert, Tim Anderson, and Jose Abreu were sharp in the first two games, but everyone got going in Game 3. The White Sox didn’t have a single extra-base hit in the first two games of this series, and Leury Garcia had a double and a home run, Yasmani Grandal went yard, and Andrew Vaughn came off the bench to hit a double.

This is a very dangerous lineup when everything is clicking. Five different players had multi-hit games on Sunday, and both Eloy Jimenez and Yoan Moncada were among them. They should keep raking on Monday.

Urquidy posted a 4.05 ERA in June before being shut down for two months due to injury. He finished with a 4.25 ERA in September and October, and he has given up two earned runs or more in five of his last six starts. Additionally, Urquidy has allowed five home runs in his last three outings.

Kyle Tucker has been very good in this series. Tucker had a great 2021 campaign and was one of Houston’s best players. He had a home run and a double on Sunday, and he knocked in four of Houston’s six runs.

The Astros continued to get good play out of Jose Altuve too. Altuve has now reached base six times in three games. He has taken four walks, showcasing his elite batting eye.

Yuli Gurriel is not having a good postseason. La Piña is just 1-12 with five strikeouts at the plate to this point. Dusty Baker has dropped him to seventh in the batting order, and the absence of his power has hurt the efficacy of this offense.