The second-seeded Toronto Raptors will look to rebound on Tuesday from the NBA Bubble in Orlando when it meets the third-seeded Boston Celtics in Game 2 of their second round series. 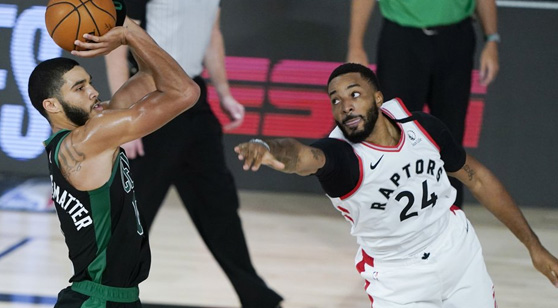 The Boston Celtics captured a wire-to-wire win over the Toronto Raptors in Game 1 of the Eastern Conference semifinals. (AP)

Despite being thoroughly handled in Sunday’s Game 1 contest, the Toronto Raptors remain one and a half point favorites for a second consecutive matchup with Boston, as the oddsmakers appear to be giving a slight lean to the defending champs in Game 2, who will be looking to post a statement bounce-back effort.

‘Under’ bettors walked away with winning tickets following the first matchup of this series, as these teams combined for just 206 total points in Game 1, mostly thanks to Toronto’s whopping total of 94. Similar to the opening spread for this contest, the oddsmakers decided to “set it and forget it” with the ‘over-under’ as well, leaving it at the same total as the first matchup – OU 216.5 points.

At times in the first quarter of Game 1, it was tough to tell if Nick Nurse’s team was playing flat on defense or if the Celtics just came out of the gate scorching-hot on offense, and the truth to the predicament is likely a little bit of both.

Boston put up 39 points in the opening stanza of this series on 57.2 eFG%, and the Raptors appeared to not have the explosive scoring ability needed to mount a comeback, as Toronto never obtained a lead after trailing by 16 points at the end of the first quarter.

Jayson Tatum and Marcus Smart led the way for Boston accounting for over 37% of the Celtics' scoring volume by tallying 21 points a piece to cap off the victory. The first game of this series was ALL Boston, as the group took three out of four periods of Game 1 by an average of 6.6 points, ultimately leading to a 112-94 triumph.

It was a wire-to-wire win and cover for Boston in the opener and bettors pressing the Celtics connected on all the dots.

Total bettors playing the 'over' got off to a great start with 62 points in the first 12 minutes but Toronto's inefficient offense helped the 'under' prevail the rest of the way in Game 1.

Celtics vs. Raptors
How to Handicap Game 2

The Celtics continue to get no love from Vegas, as Brad Stevens' crew will head into Game 2 of this seven-game bout with the Raptors as underdogs yet again, despite pummeling the defending champs in the series opener.

Boston will not likely tally another 39-point quarter for the remainder of the post-season, especially against the second-ranked defensive unit in the NBA (TOR), so it is best to analyze Game 1 through a lens of the back three stanzas, which the Celtics won by a total of two points.

I thought Boston’s dominant performance on Sunday would have pulled the spread for Game 2 back down to a ‘pick’em,’ but Raptors bettors still have faith in their resilient group, and I can’t say I blame them after last year’s title run.

If Walker and Smart continue to shoot at the clip they shot from downtown in Game 1 though (9 for 16), Toronto doesn’t stand a chance once that gets mixed in with the offensive efficiency of Tatum.

Nick Nurse’s team better have more gas in the tank for Game 2 than they brought for Game 1, because his team got outplayed in just about every aspect of the contest in the first matchup between these units, and Toronto is supposed to be the superior team.

The Raptors scored under 25 points in three out of four periods of Game 1 averaging just 23.5 points per stanza, which is a little extreme for this matchup, but does shine light on Kyle Lowry and his crew’s consistent offensive woes against Boston, as they now average just 103 points per game against Boston this season.

Serge Ibaka was a bright-spot for the Toronto in Game 1, as he went three for seven from 3-point land, tallying 15 points in the loss, but the Raptors are going to need a lot more help than that if they want to hand the Celtics their first playoff loss on Tuesday night.

Tremont Waters was the lone player to be added to the injury report following Boston’s Game 1 victory over the Raptors. He is questionable with a knee injury, adding to a list that already consists of Hayward and Green.

Toronto is not going to advance to the Eastern Conference Finals by getting into shootouts with snipers like Tatum and Walker, so I expect the Raptors to bounce back in Game 2 by slowing down the game and giving an intense defensive effort, similar to the performances they put out following the loss in their playoff opener with the Nets when they held Brooklyn to an average of 95.5 points in Games 2 and 3 of the first round.

Give me the ‘under’ here, as I think we get a low-scoring Game 2 going down to the wire, with both teams having multiple chances to steal a victory down the stretch.